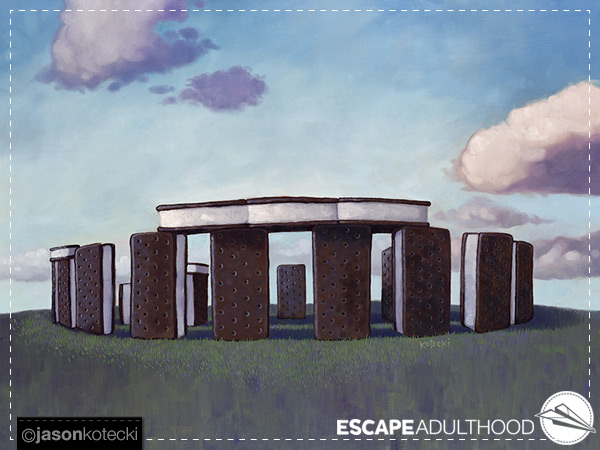 I remember the painting critiques back in art school. After spending several weeks working on our masterpieces, we’d all sit in a circle and explain what our paintings were about. Someone would inevitably say their piece was a postmodern reaction to the phycological impact of the industrial revolution that caused existential dread. To me it looked like a canvas with some paint sloppily applied. It did seem like the students who were better at making “serious” art got better grades. (Or perhaps they were just better at explaining why their art was serious.)

Perhaps this is why, after making this painting of Stonehenge, constructed with ice cream sandwiches, I feel obliged to explain why.

There are many theories about what Stonehenge is, who built it, when it was built, and what purpose it served. Many theories, but nobody knows for sure.

Of course, someone put them there. Someone had a reason for it.

Most theories assume it served some sort of “serious” purpose concerning astrological events or burial rituals. But maybe it was simply a good challenge that helped pass the time because nobody had invented cable yet. Maybe it was a primitive tourist attraction. Maybe it was just for fun.

People flock to Stonehenge not because they know what purpose it served, but because of the mystery. And mystery is fun. Plus it looks cool. Which is also fun.

Whimsy and fun are often seen as extra, nonessential. But fun is its own reason for being.

Imagine having the opportunity to jump into a pool of noodles. No child would ever wait until they could answer the question, “But what purpose does this serve?”

People with Adultitis need data and statistics before they justify why having fun is important. They can be found, but if you ask me, most of them are common sense.

These are theories that explain why we should take having fun seriously. Why not have fun simply because… it’s fun?

We are constantly in the pursuit of happiness. I don’t know about you, but I’ve never seen someone having fun who is unhappy. Do we really need data to prove that a life filled with fun is better than one that isn’t?

Why did those ancient people build Stonehenge? I don’t know.

Why did I paint Stonehenge made out of ice cream sandwiches? Because I thought it would be fun.

Sometimes, that’s the only reason you need.