The Challenge: Take a picture of the most childlike spot in town. 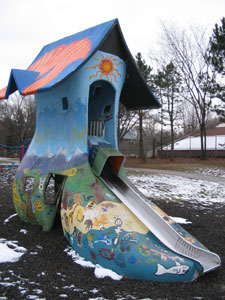 I immediately thought of this shoe slide that is a part of the playground near Madison’s Vilas Zoo. I would’ve loved this as a child! It reminds me of something similar that I experienced when I was little. The McDonald’s that was in my hometown had a big Ronald McDonald car in the seating area, which actually had two built-in booths. I always hoped to sit in “the car” when we went there. I can only assume that kids would love to go to this park because of the “Old Lady’s Shoe.”

Just for fun I looked up the actual nursery rhyme to see how it goes and found the original version to be not unlike most original nursery rhymes: surprisingly harsh, which is probably why I found tons of “adapted” versions that were much more “PC.”

Old version:
There was an old woman who lived in a shoe
She had so many children she didn’t know what to do.
She gave them some broth without any bread,
Then whipped them all soundly
And put them to bed.

PC version:
There was an old woman who lived in a shoe
She had so many children she didn’t know what to do
She gave them so broth along with some bread
Then hugged them all soundly and sent them to bed 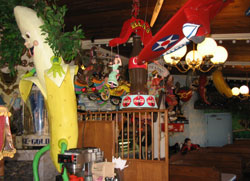 I would say that Ella’s Deli is the most childlike spot in Madison, Wisconsin. But that doesn’t mean it’s easy to photograph. This place is an old-time delicatessen and ice cream parlor that features a classic carousel in the summertime. The inside is an overwhelming feast for the senses. The entire ceiling is populated by animatronic characters: a Superman that flys back and forth, keeping watch on diners below… tropical fish that spin round and round…a genie that skims through the air on a magic carpet. There must be a hundred of them — definitely over fifty — and I’d bet that Ella’s is the electric company’s favorite customer. 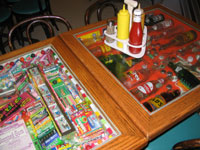 We took our nieces there last weekend for ice cream and I was waiting for the youngest’s head to explode due to sensory overload. (Speaking of ice cream, they also have a $38 sundae called the Sparkled Kazoo that boast 32 scoops of ice cream and sparklers for decorations.) I particularly enjoy the tables, many of which have detailed shadow box type displays — some with movable parts — which add a taste of nostalgia to the menu. Within the tables pictured here are old soda bottles and candy. Ella’s website sums it up, saying, “The effect is one of entertainment for children and for adults who will remember many of the things from their childhood.”

And that’s why I think it’s the most childlike spot in town: it offers up a serving of childhood to the young and old alike.