The Challenge: Get out of your element. Go somewhere you’ve never been before.

Jason and I were pretty adventurous (and poor) when we moved to Madison almost 6 years ago now, so going for rides was a pretty cheap and fun thing to do. We soon got to know where we were going and since gas prices have spiked, our rides have been less frequent. So, my goal today was to go for a drive and to get lost. Really lost. It took me a handful of random turns to actually accomplish this, but eventually I wasn’t sure where I was. It was pretty fun! I drove around for about 15 minutes looking closely at the unchartered territory, noticing the different stores, neighborhoods, scenery. It was pretty neat. I felt like Lewis and Clark, except I was in my Grand Am with my favorite cd playing…but it was pretty close to the same feeling, I’m sure.

Jason:
I suppose the best way to prove to yourself that you’re somewhere you’ve never been before is by getting yourself lost. That’s what happened to me today. We live near the University of Wisconsin campus and I decided that I wanted to check out the Geology Museum. The big draw: dinosaurs. I remember being giddy with excitement when I was in third grade and we went to the Field Museum in Chicago. The big draw then: dinosaurs. I guess not much has changed. 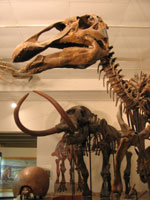 After consulting a map, I thought I had a pretty good idea of where the place was. It took me forever to find a parking spot. I didn’t have a lot of time, which pretty much assured that I’d get lost. I did. It was like looking for the invisible man at night.

I was starting to give up hope — and my parking meter was starting to give up minutes — when a nice girl pointed me in the general direction of where she thought it was. I set off in the opposite direction, with one last chance  to find the museum before I had to head back to the car. I found it, and had a grand total of 12 minutes to explore. Luckily it wasn’t that big of a place, and like a sun baked –frostbit, actually — paleontologist, I discovered what I set out to find: huge skeletons of a woolly mammoth and a duck-billed dinosaur. Pretty sweet.

I got back to my car just as the parking nazi was about to notice my meter had finished digesting my change. Double sweet.

Then I was off to write. Considering I normally go to Starbucks, I decided to stick with today’s theme and try a new place — Ancora Coffee — where I am now typing this. And after a cold windy morning of walking, the hot chocolate I ordered was triple sweet.