The Challenge: Play a practical joke on someone.

As I was thinking about this challenge in the shower this morning the perfect idea fell from the sky, or at least from over the shower curtain. As part of Jason’s practical joke on me, he threw marshmallows over the curtain at me. I was not expecting that at all. This did inspire me to seek revenge as the motivation for the practical joke I would soon play him. As more marshmallows showed up throughout the day, I was more and more excited to get to lunch where the joke would take place. I decided to take one of the many marshmallows that Jason threw at me and I hid it at the bottom of his cup of milk. In order to get it heavy enough to keep it at the bottom of the cup I stuffed the marble from Challenge 5 in the center, along with about six pennies. Jason drank almost all of his milk until he got to the very end and saw the nasty mushy marshmallow at the bottom. He was pretty surprised and grossed out. 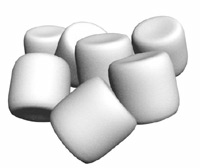 I’m not a practical joker by nature, and I’m not especially fond of the really cruel ones. (Maybe I’m afraid of karma exacting revenge.) It took me a while to get into the spirit, but once I did, I had fun with it. I took a playful approach on my target, who happened to be some girl named Kim.

We had a stale bag of jumbo marshmallows in the cupboard so I decided to put them to good use. I threw a couple into her shower this morning. I hid some in her shoes, her stocking hat, her glove, her purse, the dashboard of the car, and in each of her coat pockets. She’s been discovering marshmallows all day long.It was so cool to watch in anticipation as she found each one. And as of this writing, there are even some hiding spots she hasn’t found yet 😉  Of a better use for stale marshmallows I cannot think.