The Challenge: Eat something you’ve never had before.

When you’re a kid, it’s inevitable that you’re trying new things all the time. Sometimes after having to sit at the kitchen table for two stubbornly long hours. Well, as I walked around the entire grocery store, then walked some more, I realized that the things I haven’t tried in my 27 years have been for a very good reason. I just couldn’t get myself to pick up the little can of sardines. I almost puked just thinking about it. I am not that picky of an eater, so this was a challenge. Eventually I stood there in the baby food isle, deciding between beef and veal. I wanted to pick one of the meats, because, quite frankly, that is just nasty to think about meat in ‘baby food’ texture. I have never had veal before, so I thought this would be a good way to go. The video of me eating this is pretty graphic — total gag effect. It was far nastier than I even dreamed. It was so bland, yet smelled so strong. Meat should never be mushed. I almost spit it out. I know I would have if it weren’t for that video camera in my face. 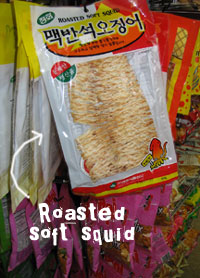 Perhaps you’ll remember the roasted soft squid from my visit to the oriental grocery store back in Challenge #1 (I know I’ll never forget it!) I was very curious about that stuff, and originally wanted to buy a package but alas, I had no cash on me. Well today was the day for my curiosity to be satisfied.

Kim picked up some squid for me while she was out running errands. I have to say, psychology got to me. Even though the food — and I’m using that term lightly — didn’t look anything like squid, I couldn’t get the slimy guy out of my head. I definitely know it’s all psychological, too, because I NEVER think of cows when I’m downing a juicy hamburger.

It tasted sort of like shrimp or crab, which I like, but in jerky format. Pretty chewy. I can’t say that it was terrible, but I certainly wouldn’t go putting this in bowls for my party guests, which is what the display recommended. I once heard that in most cases, if you try something three times, you’ll start to like it. Maybe I’ll take another stab at it this evening and I’ll end up becoming a squid jerky junkie.