The Challenge: Do something to make the world a better place.

Kim:
I think the world is made better one person at a time. I thought about the people I know and someone very specific came to mind – a man who I think makes the world a better place each and everyday. He is a youth minister in a nearby church and Jason and I have had the privilege to see him “in action.” He is such an awesome role model and the genuine friendships he has with his students are definitely impacting the lives of these young people for good. We spoke to his students and it is obvious that they are inspired by his dedication and leadership. He and his family make many sacrifices for him to work in that job. It is tough to live on a church salary as the breadwinner and raising a handful of kids, but he is committed to his students and his ministry.

I think people like this need to be thanked for their impact. Often, they don’t hear enough how much their lives are affecting others. So, I typed up a letter to him (without signing my name) and told him how much he inspires me. I wrote some of the specific things I’ve observed him doing to help make the world a better place. I encouraged him to keep going, even through the hard times.

I wish I had the money to include a big check in the letter, so that him and his family could go on a weekend getaway to WI Dells or something. I do have a coupon book that has some coupons for free things in the area. So, I included a handful of coupons for free ice cream, gourmet coffee, cookies, etc. I hope the note brightens his day and inspires him to keep making the world a better place- one person at a time. 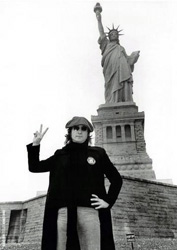 I made a real effort to tackle this one with the mindset of a child. Maybe it’s the retired superhero in me, but it seems to me that if you ask a kid to do something to make the world a better place, his first thought would be to think big. As in “whole world” big. This made me feel pretty insignificant; after all, what could I do to make the “whole world” better? Not even Oprah has THAT much reach. But I know someone who does, which is why I turned to prayer. I think God’s got the most pull of anyone I know.

Ah, but what to pray for? My thoughts eventually turned to the Middle East. To be honest, I don’t have a lot of hope for the Middle East in general. I think it’s an Adultitis enhanced form of cynicism that has developed in me over the years. I mean, that entire area has been a hot bed for violence since the beginning of time, what hope do we have for peace? But that’s not how a child would look at it. To a child, ANYTHING is possible. He would send his prayer up to the big guy, fully expecting a positive response.

So I pulled out my rosary, recited the prayers I learned back as a kid in Catholic school, and tried to muster up as much optimism as possible for the Middle East. I prayed that good things would continue in Iraq, and that God would help that area blossom into a beacon of peace for the “whole world.”