The Challenge: Make someone a homemade gift to show how much you care about him/her or to thank him/her for a job well done. 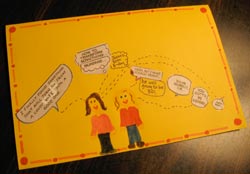 Well, as you may remember from Challenge #33 last Saturday I hosted a surprise birthday party for Jason to celebrate his 30th birthday, which happens to be this Saturday. This party would NOT have happened if it weren’t for my sister-in-law, Katie, who initiated the idea and pretty much organized most of it. So, in order to show her how much I appreciated her help I took a page out of my own childhood- I made her a homemade card. Ironically she had brought Jason and I the funny pages a while back from her massive Sunday paper. I had them in the recycling, so I dug them out and started reading some of the captions. I ended up cutting out captions and putting them in an order to tell the story of how the party came to be. I even found a cartoon of a little blue bird, which is symbolic for Jason (Jbird). The text came together perfectly. I added some fancy little borders on the card and away it will go to her house. I plan to mail it so she will be surprised, unless of course she reads this first. 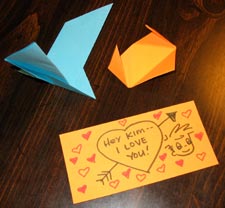 I hate origami. I only wish I knew that before I started this challenge. I spent half an hour trying to make some “simple” origami creations for Kim. We just got back from Tampa, and she manages all of the details for my speaking engagements. I wanted to thank her all of her hard work — she really does a great job, and makes it look easy. I was so excited to make a little origami sculpture. “This will be so cool,” I thought. “Very creative,” I thought. “And simple, too!” I thought.

I blew 15 minutes trying to make a bluebird. I wanted to make a bird because “JBird” is one of Kim’s nicknames for me. Got to about step 6, then the instructions got confusing. I’ve never been very good at comparing and following 2-D diagrams and 3-D reality. (I have a heckuva time putting office furniture together.)

Then I decided to try something a bit easier. I found a simple heart project that involved six steps and was supposed to take 1-3 minutes. Ten minutes later and I was ready to throw my origami rejects out the window. Finally, I decided to express my appreciation the old fashioned way: marker on paper. My final project was not as exciting as I had hoped, but at least it was sincere. And frustrating.

(In a related story, while Kim was doing her project — completely independent of me — she found a cartoon of A BLUE BIRD MAKING ORIGAMI. I wish I could make this stuff up.)