The Challenge: Do something your parents would never let you do as a child. 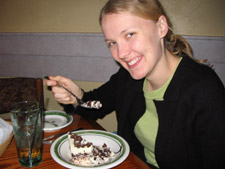 The word “never” in this challenge really stumped me. My parents were strict but not militant. As I thought about it most of the things they “never” allowed us to do were really for our own safety. After some soul searching I realized there was one thing: eating dessert first. My parents would never have allowed this. So, now that I am in charge, why don’t I do it more? Jason and I decided to head out to dinner, so I picked Olive Garden because I remembered seeing a yummy dessert that I’d like to try- chocolate lasagna. When it came time to order I told the waitress I would be ordering dessert first. She admitted that she would like to do that more but feels too embarrassed. It did “feel wrong.” I ended up getting an appetizer for my entrée. I was so stuffed. I felt like quite the dinner rebel. I highly recommend it!

When I was a wee lad, I was enamored by Play-Doh®. Especially the smell and the way it felt in my hands. I even had a Play-Doh playset: The Fuzzy Bumper Barber Shop. It was awesome. There was a little plastic guy with holes in his head. You’d jam Play-Doh into his noggin and put him on the barber chair. As you’d push down, the compound would squeeze out of his head, creating a beautiful head of pink or blue or brown hair. There may have even been a beard/shaving element to it as well.

The trouble was that my mom never let me play with it. Ok, maybe that’s a slight exaggeration, but I swear I can count on my hand (with a few fingers chopped off) how many times I did. On the blue moon when I was allowed to play with it, it was at the kitchen table. I remember being surrounded by some sort of plastic tarp, and a hermetically sealed white NASA space suit might have been involved. Anytime I asked for one of those Play-Doh food kits — I LOVED those tiny hamburgers — I was always denied.

Today I went out and bought myself the Fuzzy Pet Parlor for $7.49. It was the closest thing to a barber shop I could find. I got home and created some very trendy hairstyles on various pets. I even — get this mom — played with it on the carpet!