I Wish Steve Carell Was My Uncle

Unknowingly something happens between the ages of 25 and 45 where you think you have to be “more serious.” I was talking with someone last week who said that the parenting years are the hardest because you have so many responsibilities and have to be the “adult,” so that life can remain sane. Ironically, all of the efforts to keep the scale balanced leaves you to one harsh reality…you’re now officially boring.

“It is our responsibilities, not ourselves, that we should take seriously.”
-Peter Ustinov

No one starts out wanting to be boring, it just kind of happens. And no one wants to admit that they, indeed, have chronic fits of boredom.

Whenever Jason and I share the short definition of Adultitis, it’s immediately obvious who has it and who doesn’t by the look on the person’s face. I say,

I undoubtedly get one of two faces:

Option 2: wrinkled nose and forehead, often accompanied by a head slant, as if to say, “Boy, that’s harsh.”

Which person do you think is riddled with Adultitis?

No one wants to admit they are stressed, depressed and dull.

I talk a lot about being stressed and depressed. Today I’m focusing on “dull.” What a terrible word. 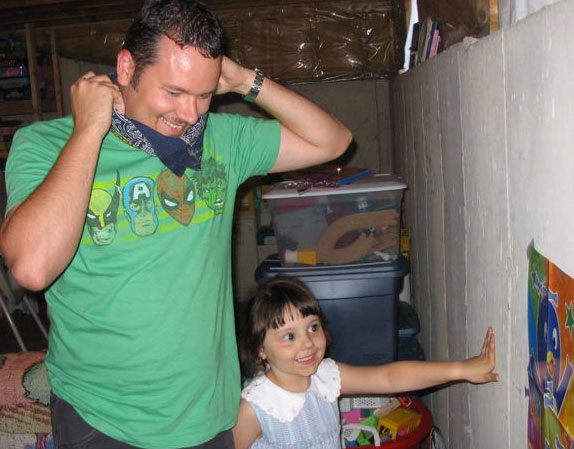 No wonder people wrinkle their noses.

How do we undullify ourselves? (Yes, I am making up words here.)

I’ve noticed that often times uncles have a way of keeping Adultitis in remission by goofing around with the kids- roughhousing, as mom liked to call it. Uncles like getting the nieces and nephews all riled up and then leaving them to their parents, hence the stress and dulldrums experiences by the parents mentioned earlier.

Sidenote: My favorite part of any child’s birthday party is when everyone sings Happy Birthday and then the birthday kid spits all over the cake. Seriously, though, I get chills every time the wish is made and the extinguished candles make the room dark. Kids ages four to seven make the best faces during the “candles” portion of the festivities. You know what I’m talking about.

Birthday parties are classic opportunities for the fun uncles to surface. Did you have a fun uncle? I had a handful of them and it’s fun to see Jason serve that role for our eight nieces and nephews. Jason was one of two adults to partake in the challenging party game, “Pin the Bow on Pablo” (from Backyardigans). The other adult was Jason’s dad. I guess it’s not difficult to figure out where Jason gets his playfulness.

We can learn a lot from our fun uncles. (including the differences between being childlike and childish)

Who would you rather have for an uncle…Robin Williams, Steve Martin, Jim Carrey or Steve Carell?

Would you ever use the word “dull” to describe any of these guys?

They are classic examples of people who do not take themselves too seriously. Ironically many of them have been able to successfully pull off the crossover into dramatic roles, so they are living proof that “there’s a time and a place for everything.”

Next time you catch yourself wrinkling your nose and sliding into the dull adult role, check your stress at the door and breath deeper, live in the moment, and lighten up!

“If you can’t laugh at yourself, don’t worry someone else will.”