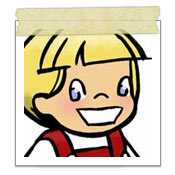 Kim is a spunky little girl who is a bundle of innocence, unabashed confidence, and hopeless naiveté. She has the ability to pare down complex issues into tidy and logical, albeit misguided explanations. Her carefree attitude guides her through life and her stubbornness sometimes gets the better of her. Her most prized possession is a stuffed skunk named Stinky, a gift from Boompa.

Quote: “Grown-ups are always in a hurry. It’s like they’re all playing tag and everybody’s ‘it’.” 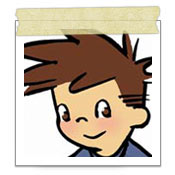 Jason is a little boy with hair that’s as wild as his imagination. Kim’s best friend is smart, shy and thoughtful; and usually enveloped in a world of dreams and fantasy. He can often be seen saving the world from evil as Super J, a fearless, 3D goggled superhero with supreme confidence. His hero is the fictional swashbuckling space smuggler from Star Warriors fame, Ace Laser.

Quote: “I got a lot of good loot for my birthday, but I’m surprised I didn’t get the home fireworks kit.” 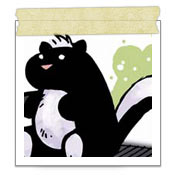 Stinky is Kim’s favorite stuffed animal, who just happens to be a skunk. Although inanimate and unable to communicate audibly, Stinky has a remarkably distinguished taste and outlook on life. A connoisseur of the English language, gourmet food and the finer things in life, he has an opinion on pretty much everything. Despite his mature perspective, nothing clouds his loyalty to Kim. Stinky reeks of Old Spice, which was applied by Kim in an attempt to get him to smell more skunk-like.

Quote: “I suppose a one-way flight to Montigo is out of the question?” 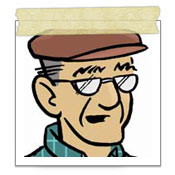 Boompa is a wise and witty senior who provides answers to some of life’s most challenging questions. A retired carpenter with a heart of gold, Kim’s grandfather is always giving the kids gifts and explaining how things work. He is old enough to know the wisdom that children possess, and always takes time to honor their questions, stories, and ramblings. Despite a lifetime of experiences, Boompa has not yet outgrown his childhood.

Quote: “Green elephants are good at catching frisbees, but pink ones are easier to house train.” 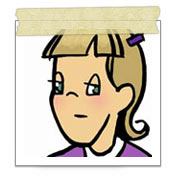 Katie is Kim’s seventh grade older sister. To Kim and Jason, she is evil incarnate, the quintessential older sibling who knows everything and tells all. Usually annoyed by her younger sister, Katie is wrapped up in her world, a world of boys, and school, and volleyball. For some reason, she seems to thrive on making life miserable for Kim and her friend, never hesitating to take the passive aggressive cheap shot or manipulating them to do her will. There are moments of civility between the sisters, albeit short-lived.

Favorite Things: Boys, purple, writing in her diary, tormenting Kim, volleyball, The Boy Band of the Month, cute boys of all sorts, Mr. Harris (her history teacher who bears a striking resemblance to Jared from Subway) 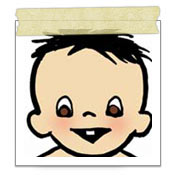 Dougie is Jason’s younger brother. He mumbles garbled sentences and is often an annoyance to Kim and particularly Jason, although they occasionally like to amuse themselves with him. Dougie likes to eat stuff, preferably things made of plastic and owned by Jason.

Favorite Things: The taste of plastic, drooling, his older brother.