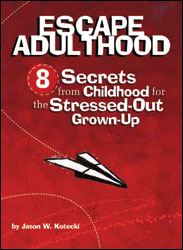 Jason Kotecki, author of “Escape Adulthood: 8 Secrets from Childhood for the Stressed-Out Grown-Up,” will discuss “adultitis” during an intergenerational program March 19 at Annunciation in Minneapolis.

Annetta Sutton, Annunciation’s adult faith formation director, said she called Kotecki to do the presentation after reading his book.

“It is an easy read, with some profound insights,” Sutton said. The light-hearted material is something she said people need, especially during their Lenten journey.

“Most of us grew up giving up things,” Sutton said. “I think it’s important that we give things. This is giving a treat to the parish community,” she said, adding that the free event is open to everyone.

In a telephone interview from his Wisconsin home, Kotecki said his road to writing and speaking started about 10 years ago, when he established his own publishing company to distribute the Web design work he did then.

Now, it is the vehicle he uses to distribute his free daily comic strip “Kim and Jason,” which goes out to about a dozen newspapers in the Midwest, including The Catholic Herald (Madison, Wis., diocesan newspaper), Monroe (Wis.) Times, newsletters, church bulletins and many online subscribers, who live in 37 countries, he said.

Kotecki said his faith, nurtured by his parents, came alive during college when he attended a TEC retreat and then was inspired by Father Stephen Knox at Northern Illinois’ Newman Center.

“One of the Bible verses that stuck out: Jesus said we have to have a childlike faith. . . . It resonated for me,” he said. “Being a cartoonist, I’ve been blessed with a natural, childlike faith.”

His wife, Kim, whom he married in 2000, also has a childlike spirit, he said.

“All those things helped shape me and continued to inspire me to be passionate about God,” he said.

As the online business grew, Kotecki said he wanted to outline what kids naturally have that adults want.

Writing the book involved a lot of prayer, he said. “I wanted it to be guided by the Spirit.” He jotted down ideas he had and stories he heard, until he formed the “eight secrets.”

“A couple of years ago, I started doing cartooning workshops at schools,” Kotecki said. Then he branched out to talks for high school students, confirmation classes and a family program, where he used the ideas he had for the book.

“I realized I had a knack for being able to connect with the little kids and the parents at the same time,” he said. “I really had a passion for talking about this topic with adults and families.”