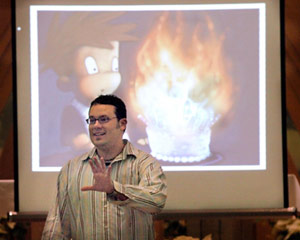 MANKATO — You’ve seen these rare specimens before. You may have even sneered or looked down your nose at them, perhaps threw a disapproving glance in their direction.

You can find them rolling around in autumn leaves just for the sheer joy of feeling and hearing foliage crackle beneath them, or running through lawn sprinklers on hot summer days, caring not that doing so would soak their shirts and dampen their pants.

They are the rare adults, says Jason Kotecki, who are not afflicted with Adultitis, an affliction that causes adults to forget how to have fun, forget that there’s a child inside each adult who in many cases is forgotten … forever.

“Life is a gift and it’s meant to be lived,” says Kotecki, an adultitis expert/comic strip creator/motivational speaker.

He appeared Thursday night at St. Joseph the Worker Catholic Church in Mankato, bringing his positive, faith-inspired message of marveling at life’s little pleasures to a crowd of about 200 people.

Kotecki is the creator of the “Kim & Jason” comic strip, which he describes as being “about forgetting grown-up trivialities and remembering what it was like to be little with a big imagination. It’s about escaping adulthood if only for a few much-needed moments a day.”

These days he produces the strip, keeps up a Web site (www.KimandJason.com), writes books and speaks to groups such as the one in Mankato Thursday. His book, titled “Escape Adulthood: 8 Secrets From Childhood for the Stressed Out Grownup,” is sort of the basis for his talk.

Kotecki spent Thursday night talking about a few of those themes, including “Play,” “Delight in the Little Things,” and “Have Faith.”

“How did we get to the point where we’re so bad at playing?” he asked, moments after quickly drawing a giraffe to illustrate that God — designer of the giraffe — must have had a sense of humor. 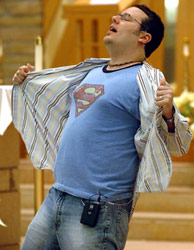 “There’s some people who I don’t know if they’ve laughed 15 times in their whole life!” he said.

Then Kotecki got the audience playing. He passed out sheets of paper and crayons and told them to doodle. He then told them to pass the sheets to their neighbor and have them add to their doodling. Then they passed them again, with the goal being to draw an animal of some kind.

Why? If you have to ask, you probably have Adultitis.

Kotecki’s also addressed the faith in which much of his life is rooted. There are examples in the Bible, he said, that show God wanted grownups to embrace the child within, and perhaps even pay more attention to the children around us and how they act.

“I think Jesus invented wedgies, wet willies and nuggies,” he said, referring to the story in which someone tries to shoo away the kids, and Jesus insists the children should be allowed to stay. “Kids flocked to Jesus, so he must have been a fun guy.”

Mostly, his message is that adults should just slow down and remember how good it feels to have fun.

“Life is too short,” he said. “And there’s too much living to be done.