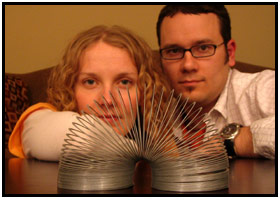 MADISON, Wis. — You may not have heard of adultitis, but if you are in your 20s or older, there’s a good chance you’ve suffered the symptoms.

Feeling in a rut? Feeling overworked? Feeling like you never experience joy with childlike wonder anymore?

Those are all symptoms of adultitis. La Salle County natives Kim and Jason Kotecki recognize this and want to help people find a cure.

The Madison, Wis., residents – Kim is an Ottawa native and Jason is from Peru – have undertaken a 40-day experiment they call the Escape Plan. Each day the couple undertakes a new challenge designed to recapture a bit of childlike joy – all of which is being chronicled on their Web site, www.kimandjason.com/escapeplan.

Past challenges have included putting a childlike spin on something routine, talking in a fake accent to a stranger, and writing a haiku about things for which they are thankful.

“One of the keys is to not be childish, but act childlike,” Jason explained. “The idea is not to shirk adult responsibilities. It’s about finding ways how you can interject fun into your everyday life.”

Kim and Jason separately take on each challenge and then later post their results on the Web site, complete with photos and video when possible. Visitors to the site can let the Koteckis know which of the two they think did a better job meeting that day’s challenge.

“That sort of adds a Civil War aspect to it,” Jason said. “So far it’s worked out that each of us is winning about half the challenges.”

Visitors also can post comments about their own experiences meeting the challenges if they are also doing them.

“In a way it’s a lot like a reality show,” Kim said. “Throughout the 40-day journey, people can vote on which of us they think did a better job meeting each challenge. We also try to invite people to take the journey with us.”

People from throughout the world are taking on the challenges, she noted, including a man from Australia and somebody from the United Kingdom.

“The biggest thing for me is that this will be a call for people to do what we’re doing, battling adultitis by thinking and acting in a more childlike way,” said Jason, who pens a comic strip aptly named “Kim & Jason.”

“People always complain about these symptoms, that they’re always stressed or overworked, and they’re missing out on things they enjoyed as a kid,” Kim said. “It’s like a disease you get as an adult. When we tell people they have adultitis, it’s like they’re relieved to finally know what they have, what it’s called.”

The idea seemed like a natural project for them to tackle, Jason said, because “between the two of us, there’s an innate childlike spirit we share.”

The challenges each last between five and 30 minutes and can be done anytime of the day, said Kim.

While each challenge is meant to deliver childlike joy and wonder, some are harder to meet than others, the couple agreed.

Kim said she had a particularly hard time coming up with her response to the 11th challenge, which was to do something her parents wouldn’t let her do when she was growing up.

“You realize that most of the things your parents wouldn’t let you do were for safety reasons,” Kim said. “You don’t really want to play in the highway.”

She found her solution when she and Jason went to the Olive Garden for dinner.
“I ended up ordering dessert first,” Kim said. “Then we had appetizers. I didn’t actually eat dinner.”

The hardest challenge for Jason was immersing himself in something he knew nothing about. He decided to learn more about oriental food — which he later spun off into another challenge, eating something he never tried before.

“I was supposed to eat something new, so I tried the roasted soft squid,” Jason said. “I ate just a bite of it. It was fascinating and completely gross.”

On the other hand, he’s also had fun with food as a result of the challenges. The couple recently tackled the challenge of adding color to something in a new and unusual way. Jason decided to use food coloring to give his breakfast a new look: green eggs, red orange juice, and blue cereal milk.

“Food coloring is the best toy ever,” Jason said.

The 40th and final challenge takes place Saturday, which happens to be Jason’s 30th birthday. The Koteckis hope to spark enough interest in the idea of taking challenges to battle adultitis that others will follow their lead and post their childlike adventures on their Web site.

“I’m thinking about going through the 40 days again without the time crunch of having to record videos, post pictures and all that other stuff that adds more time to it,” Jason said.