Adulthood? Bah, who needs it anyway
By Dave Wischnowsky 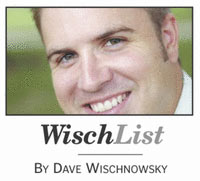 Jason Kotecki lives — and, for that matter, works — by the motto “Escape Adulthood. Return to Childhood.”

But that doesn’t mean that last Friday night the 27-year-old Peru native donned a crimson cape, dressed up as Superman and went ringing doorbells with a pillowcase full of candy in hand.

At least, I don’t think so.

Regardless of his Halloween habits, however, anyone who knows Kotecki — now living and working in Madison, Wis. with his wife, the former Kim Halm of Ottawa — will tell you that there’s no doubt the 1994 La Salle-Peru High School grad is still just a kid.

And his own comic strip.

“It’s really great. I spend my time drawing pictures for a living,” said Kotecki, the creator of “Kim & Jason,” his self-proclaimed “comic strip about childhood.”

Kim and Jason — both real and imagined — had their genesis in Oglesby when the real couple discovered that they shared a childlike spirit and began dating while attending Illinois Valley Community College. During that time, Jason started drawing characters representing the couple as children on homemade gifts and cards to woo Kim, a 1996 Marquette High School grad and the daughter of Gary and Joyce Halm of Ottawa.

“It really didn’t start out as a comic strip,” Jason explained. “I was just trying to use my artistic talents to win her over.”

In 2000, the couple was married in Madison, where Kim now works as a kindergarten teacher. And a few months later, they started up their company JBiRDiNK, Ltd. along with the Web site www.kimandjason.com. Featuring Kim, Jason and a number of other quirky characters — including a wise and witty senior named “Boompa,” based on Kim’s own grandfather, Rudy Halm of Ottawa — the online and syndicated comic strip is an unabashed return to innocence.

With a laugh or two along the way.

“I love to draw. I love to make people laugh. I love to encourage and bring joy to others,” Jason says in a message on his Web site. “I believe in the truth that children possess and I think they have wisdom that for some reason, us grown-ups have lost somewhere along the way.

“‘Kim & Jason’ is about forgetting grown-up trivialities and remembering what it was like to be little with a big imagination.”

So far, Jason’s imagination has proved to be awfully big itself.

Beyond just writing and drawing about children, the Koteckis also try to help them. In addition to the comic, the couple also produces a large line of “Kim and Jason” accessories, including greeting cards, candles, calendars and coffee mugs that are available on the Web site. And each month, they donate three percent of their sales to charities such as the National Adoption Center and the Make-a-Wish Foundation.

Last week, Kim and Jason were back in Illinois, visiting grade school classrooms in the Stark County towns of Toulon and Wyoming to provide cartooning workshops. The elementary students are now selling “Kim and Jason” greeting cards as a fundraiser for classroom needs and to support the Koteckis’ charities. More information about “Kim and Jason FUNdraising” for classes, churches or sports teams can also be found at www.kimandjason.com.

“Ultimately, I’d definitely like ‘Kim & Jason’ — this sounds kind of crazy — to be similar to ‘Peanuts,'” Jason said about his future goals. “Where people know it and it’s in well-known newspapers and has a whole line of products and allows us to contribute to even more (charities).”

In the meantime, this professional Peter Pan is happy to be living a childhood dream.

“When I was younger, I wanted to be a movie producer,” Jason said. “It’s taken me a while, but I’ve realized I’m pretty much doing that. I get to create my own worlds, create the characters, decide how to set up each shot and the timing of the joke.

“The creativity of it all is what drives me … And we’ll see where the road takes us.”

DAVE WISCHNOWSKY is the Features Editor of The Daily Times. Send your comments and ideas to davew@ottawadailytimes.com.