In his apartment off Rimrock Road south of the Beltline, Jason Kotecki explained how he got his comic strip into the Monroe Times, the closest to home of the 20 Midwestern newspapers to carry it.

“One of their comic strip artists died,” he said. “Usually, the only way to get space is to bump off a comic, and people are pretty attached to them.”

“It’s a pretty tough thing,” he said, but for once he could enter a newspaper space without the controversy of another strip getting the boot.

For the last seven years, Kotecki, 27, has been working with the characters that star in his strip, “Kim & Jason.”

They’re childlike versions of himself and his wife, Kim, who is a kindergarten teacher. He’s been publishing the daily strip for about three years now.

“It started as sort of a way to win Kim over when we were dating,” he said. “I was broke.”

Now, his artwork is featured on a greeting card that the National Adoption Center is sending this holiday season to about 20,000 of its contacts.

The center, which is based in Philadelphia and arranges adoptions for children with special needs, contracted Kotecki for the greeting card, which features his comic strip characters Kim and Jason. Kotecki said he started his relationship with the center a couple of years ago when he donated a small amount of money to them.

This month, 3 percent of the profits from the comic strip are going to the adoption center.

“That’s kind of where my passion is, to have a part in maybe making it a bit better for kids,” he said.

The goal is simply to give more children the kind of life that he draws in his comic strips, which he says on his Web site are influenced by Calvin and Hobbes, Rose is Rose and Peanuts.

Kotecki and his wife, who have been married for about three years, have no children, and the National Adoption Center is just one of the charitable agencies that they support.

“I’m a really big fan of what the National Adoption Center does – helping to find families for children who aren’t as easy to place as healthy babies,” he said. “It’s an honorable cause, and I’m thrilled to be able to use ‘Kim & Jason’ to help.”

Kelly Resinger, director of development for the NAC, called the artwork for the card “really sweet.” She said Kotecki’s artwork is the “cutest we get.”

Kotecki works on the strip and related artwork from his home, and keeps about three weeks ahead of newspaper deadlines so he has some buffer from “brainlock.”

Looking back at the strips he’s done, he says a lot of it is based on the life he has with Kim. When the characters were having all kinds of trouble with a lemonade stand, he saw the trouble he had trying to set up a business, and at first getting nowhere with merchandise based on the comic.

Aside from the title characters, other fixtures of the strip have their real-life counterparts. A skunk, for example, is based on a stuffed animal that he gave to his wife years ago. It sits on his desk now.

Kotecki grew up in central Illinois, and moved to Madison based on the recommendation of a friend. It had what he was looking for in a city, he said. 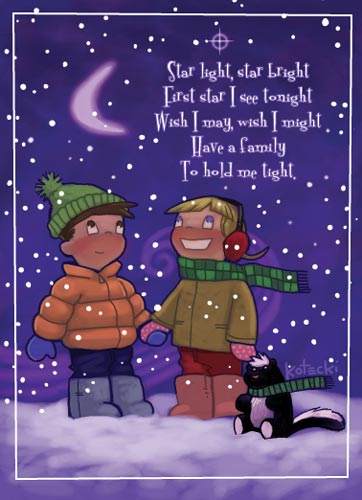