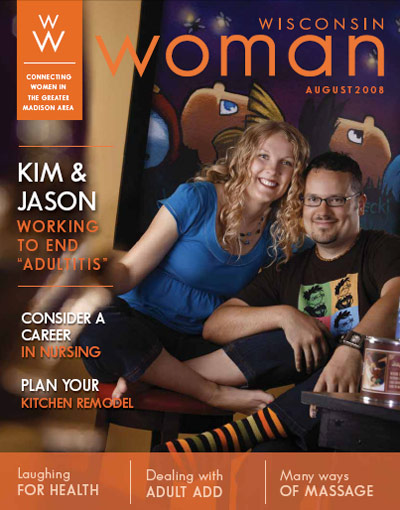 I have to admit it: I was a little apprehensive about interviewing Kim and Jason Kotecki. Would they pummel me with Koosh balls when I entered their office? Would they double-dog dare me to sing “Yankee Doodle” while standing on my head?

After all, the tagline of their business, appropriately named Kim & Jason, is “Escape Adulthood.” Their purpose is to root out Adultitis, an all-too-common condition “marked by chronic dullness, mild depression, moderate to extremely high stress levels, a general fear of change, and, in some extreme cases, the inability to smile,” according to their web site. Or, as Kim says: “People need fun so bad.”

I needn’t have worried. The Koteckis are seriously into fun, but they don’t whack you over the head with it. When I declined the offer of an earthworm-flavored jellybean during our introductory exchange, Kim smiled understandingly and said I wasn’t the only one who preferred my candy sweet.

Kim & Jason, the business, has been fighting Adultitis since its founding in 2000, when the Koteckis moved to Madison to start out their married life together. At first, Kim & Jason focused on distributing a comic strip written by Jason about the adventures of two five-year-olds. The business quickly expanded to include: 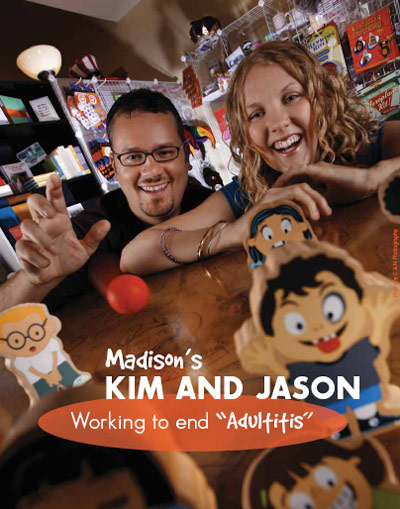 If you ask them about where they grew up, they sound like quite the international couple — she’s from Ottawa, he’s from Peru. But then they clarify that these are two small towns south of Rockford, Illinois, not the capital of Canada or a South American country. Kim liked to play with a wooden ironing board made by her Boompa (that was what she called her grandfather) and enjoyed petsitting the neighborhood animals. She thought it would be fun to be a veterinarian.Jason liked to draw and wanted to grow up to be a superhero or George Lucas, the creator of the Star Wars films. As a teenager, he worked at a car dealership cleaning cars — a job he didn’t particularly like, but then again, he didn’t expect a high school job to be all that fulfilling. What surprised him was that none of his coworkers, from salespeople to accountants, were any more enthusiastic about their jobs. Some seemed to downright loathe their work. “I remember promising myself that I would do whatever it took to do what I loved,” Jason says. “Life is too short to stay in a job because it has benefits.”

He and Kim met each other as teenagers in 1995 and attended Northern Illinois University together. Kim studied early childhood education and, in 2000, they moved to Madison. Kim took a job teaching kindergarten in Stoughton and Jason focused on Kim & Jason full time, while Kim helped out part time after work.

“Being in the classroom for five years, I really saw the common denominator among everyday families and it really bothered me, and that common denominator was busyness,” Kim says. She decided to leave teaching and focus on Kim & Jason full-time in 2005 because “I needed to step back and help the adults. When the adults feel better about the day-to-day, the kids will, too.”

Not immune to Adultitis
Despite the focus of their business, Kim and Jason are not immune to Adultitis themselves. Kim sometimes lies awake at night worrying about the future. Jason said his younger brother recently bought a house and Jason felt jealous because he and Kim aren’t homeowners, having chosen to invest their money in their business. (Jason likes to remind himself of something a friend once told him: “A life of ‘compare’ leads to a life of ‘despair.’”)

At times like these, the couple finds the best cures are playfulness and prayer. In fact, they wrote their 2006 book The Escape Plan to help themselves get over a particularly bad bout of stress and worry after Kim resigned from her teaching position — complete with its comforting assurances of a steady salary and health insurance. They developed and completed 40 challenges to help them have more fun and see the world afresh.

Kim tells about the hoot she had with Challenge #11: Do something your parents would never let you do as a child. “We went to the Olive Garden and I ordered dessert first.” She munched on her chocolate lasagna while Jason ate his arguably more healthy entrée, and the waitress kept exclaiming with delight, “I can’t believe you’re doing that!” At the end of the night, the waitress told Kim that she was going to eat dessert first the next time she went out with friends, and Kim felt like a successful ambassador in the crusade against Adultitis.

As for their childhood career dreams, they both feel they have ended up with something better than what they wanted. “With kindergarteners, it’s helping those who can’t help themselves, and that’s what veterinarians do, too. And now I’m extending that to adults,” Kim says.

While Jason was not able to become George Lucas, he did create his own characters and worlds through his comic strips. And as for being a superhero? “The reason I wanted to be a superhero is because they help people,” Jason says, and he gets to do that through all aspects of the Kim & Jason business, seeing it most clearly when he works directly with people in seminars.

They both say they are doing exactly what they want to do in life. And you can tell they are on the same page, the way they laugh when they start and finish each other’s sentences.

Kathryn Kingsbury is a Madison-based writer.