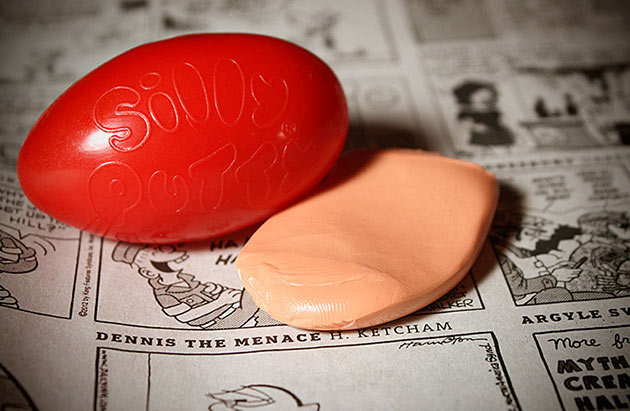 There is great debate in toy history as to who really invented Silly Putty. One thing is for sure: we can thank the American rationing of rubber during Word War II for its existence. The shortage of rubber was due to the Japanese invasion of many rubber-producing countries during that time period, which led the U.S. government to fund research into synthetic rubber compounds.

James Wright, the man who was awarded the patent in 1943, discovered that reacting boric acid with silicone oil would produce a gooey, bouncy material with several unique properties. Although it never became a suitable rubber substitute, it eventually become known as Silly Putty.

Interestingly, after his discovery, Wright sent samples to scientists all over the world, and not one was able to find a practical use for it.

Everyone knows that Silly Putty is great at lifting comic strips from the newspaper :)

And in the past sixty-odd years, we’ve amassed a number of other surprisingly practical uses for Silly Putty:

Two lessons to learn here. First, Silly Putty is probably a good thing to have around. Secondly, and most importantly, just because someone “smart” says something is useless, impractical, or can’t be done, doesn’t necessarily make it true. Remember that next time someone describes something you’ve done as a dead end.

P.S. Silly Putty is also one of the new cool things that you can add to a Build-Your-Own Adultitis First Aid Kit. Build yours today!