Kim and I had a chance to stop by Team Alswager’s thank you party the eve before their Juvenile Diabetes walk. We had the distinct privilege of meeting Michelle’s son Jesse – Kim’s first time, my second – who is now in second grade. He’s a big shot of epic proportions, spending time lobbying governors and senators and congressmen and various other hot shots. The photo here shows Jesse presenting a thoughtful gift from the Alswager clan; a framed graphic from the T-Shirt they used for the walk. Plus, it was autographed by the entire family, making it even more valuable. I’ll have to find a special place to put it so that I can always be reminded of the people out there who are doing so much to make such a difference. Keep up the great work you guys! 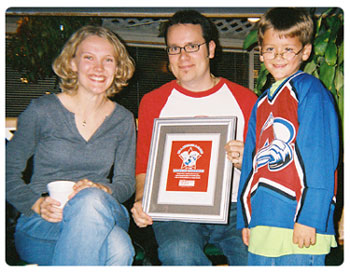