Pros and Cons of Being Male

Lately I’ve been cursing my genetically hard-wired male tendencies. I wish I could think more like a woman.

Allow me to explain.

We’ve done enormous amounts of research and analysis with Kim & Jason. Although the comic strip appeals to a wide range of people of various ages and genders, it is typically the women who buy a good majority of our stuff. And it’s not because our stuff is girly (at least I hope it isn’t), but because women tend to buy most of the gifts and cards and candles in this country. If we come out with Kim & Jason beer or Kim & Jason stereo equipment, perhaps our target market would skew somewhat.

My wife is great when it comes to giving gifts. When I say great at giving gifts, what I mean is that she actually GIVES gifts. As opposed to not having the thought cross your mind. At all.

So I figured that in order to really be effective at growing this company and improving the bottom line, I’d better get more informed on how women think. I bought and read a book called Marketing To Women. Very fascinating. I learned a lot of differences between men and women and how they shop and how they buy. But since I’ve read the book, I’ve found that there is a great big disconnect between knowing the information and actually applying it. It’s hard to apply principles that aren’t normal functions of your everyday brain activity.

In order to make some inroads in this area, I’ve made it a point to go to lunch with some very smart women. I’ve been trying to pick their brains about why they like Kim & Jason and how they would market it to people like themselves. I always come away with a treasure chest of information, but I feel like a blind guy coming away with a description of an elephant. It seems to make sense, but I have the sneaky suspicion that I’m never going to really grasp the full picture. It seems like with every great idea they give me I think: Excellent idea! Makes perfect sense! How in the heck did I not already think of that? And therein lies the problem. I did not think of that because frankly, I can’t. I’m not a woman. 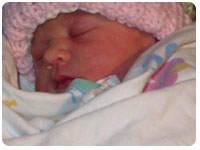 But just when I’m about to regret the fact that I’m a stupid dumb guy, my friend Jaimie (you may know her as the Publicity Princess), goes and has her first child. Kim and I were honored to have been named Godparents of baby Belle, and we got to hold her when she was only hours old. Watching Jaimie progress through the nine months of pregnancy and then hearing about how well she did throughout the delivery made me eternally grateful to be a guy.

I don’t know how in the world women can handle being pregnant and going through labor, because I know I couldn’t. It makes me glad on many fronts. I’m glad I don’t have to go through being pregnant. But I’m glad that women handle it so well, because nothing beats holding a newborn, and it would be a shame to be without that opportunity.

And I’m also glad that my wife remembered to pick up a gift before we went to the hospital.