A few months ago, I announced right on this blog that my wife Kim had officially “retired” from teaching in order to work for the company full time. Usually that’s a good sign that things are moving in the right direction – and they definitely are – but it’s not like I don’t question the sanity of our decision. 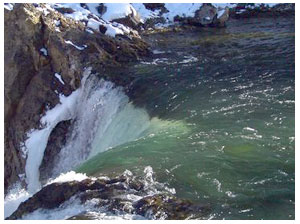 Giving up a steady paycheck you can count on for little more than the hope of something better; trading in the school district’s generous benefits package for the prospect of picking out and paying for your own; these are things that most people would shy away from. Me, too. I was afraid of my own shadow as a kid, too anxious to do anything apart from what was safe and comfortable.

That retreat I went on in junior college changed everything, though. God introduced himself to me. It wasn’t the first time He had done it, but it was the first time I was actually listening. After that, there was no going back. I decided to follow Him, and He has led me on a journey of fantastic proportions. And somehow, without even noticing, I have become more courageous, and less anxious of the shadowy unknown.

I have become more reckless. Not in the riding-a-unicycle-for-the-first-time-on-the-Interstate sort of way, but more in the Dad’s-pushing-you-on-the-swing-and-you-beg-him-to-push-you-higher-and-higher sort of way. While in my morning walk this morning listening to my shiny white box of wonderfulness (a.k.a. my iPod) a song by Steven Curtis Chapman came on that totally hit home. The song is called Dive, and I could relate to the idea of being at this precipice, feeling the call to take a leap of faith and be swept away by the swirling dervish that is God’s grace…

Kim’s last check comes in August. After that, we’re on our own. The way I see it, there are two ways this can go: 1) Very, very badly. Can you say bankruptcy and food stamps? 2) Very, very well. Spectacularly well. So well that when people look back they’ll forget how crazy of a leap it was and conclude it was obviously the right and easy thing to do.

I have come to the realization that this whole process is not about me. It’s way bigger than me. The thing that makes it all so scary is that it’s all so…public. Should we fail, everyone who knows us and everyone reading this will have the opportunity to laugh and make comments on how stupid we were to trust God. Perhaps. But there comes a time (at least one) in everyone’s life when one has the opportunity to take a tremendous leap of faith. The kind of leap where you’re not sure what (if anything) will break your fall.

If you refrain from taking that leap, no one will fault you. In fact, most people will praise you as wise, with a strong common sense. If you DO take that leap, you risk the ridicule of others, but gain the opportunity to “see behind the curtain,” so to speak. To see, do, and accomplish things on a whole new level.

Kim and I are taking this leap, even though it scares the snot out of us. And I am writing this, because if God should decide to reward us for this leap of faith, it will be for His glory. It will be in His way, and it could even be dramatic, but it will go above and beyond what our team of dreamers is able to do ourselves. “What is impossible with men, is possible with God.”

I’m pretty sure God will wait for the eleventh hour to really act, mostly to test our faith, partly I think because He has a weird sense of humor. I really believe He has option #2 in store for us, but even if He doesn’t, I have come to understand that even though falling down ain’t graceful, with God, falling down is full of grace.

Knowing that, I’m diving in.