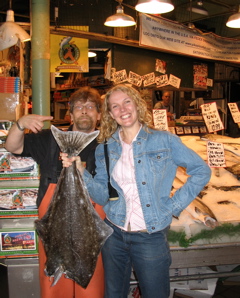 As some of you know from Jason’s blog, we are currently in Seattle, WA. Jason is putting on four speaking programs here in the Emerald City. One of the things I was looking forward to the most about visiting Seattle was getting the chance to see the fish being thrown at Pike Place Market. Who would’ve known that by the time it was all said and done, I would be holding one of those famous fish. The smelly hands that followed the experience were well worth it. Speaking of smells, Jason and I commented on the amazing mix that filled the air at the market. There were fresh flowers, a plethora of fruits and vegetables, fresh honey, coffee beans, bakery smells, and of course – fish. My eyes and ears could not take in the vast variety of things there were to look at and hear, between the vendors with their creative creations, street musicians on every corner, big ships everywhere, and the flying fish. It is an amazingly childlike place to visit.