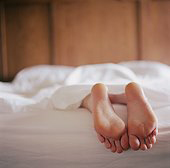 I’ve said this before, but if I had to guess, moms are probably the biggest group of Adultitis-havin’ human beings on the planet. (Most planets, I’d wager.) It’s hard not to see why — they’re usually the ones with the most things on their to-do list. And working moms have a propensity for Adultitis that is too dangerous for me to even speak of.

The Guardian featured a story last summer about how modern mothers suffer more stress and get less sleep than their own mothers and grandmothers. It cited a poll that found that “the average new mother gets 3.5 hours of uninterrupted sleep a night compared with five hours in the 1960s and 1970s…and an overwhelming 84% asserted that, given the chance, they would prefer sleep to sex.”

So, what’s to be done? Well, the research uncovered another interesting tidbit:

It takes today’s parents an average of 56 minutes to get the baby to sleep in the evening – double the time it took their own parents.

Now 69% say they have a set bedtime routine and 10% allow drifting off in front of the television.

I’m no child-rearing expert, but I know parents who have a set bedtime routine and parents who do not. The differences are dramatic, both for the children and the parents. If you are a mom with young kids and a raging case of Adultitis — start a bedtime routine. And depending on the age, don’t be afraid to put your kids down at 7, 8, or 9 o’clock. You can spend the extra hour or two soaking in a hot tub or reading something from Oprah’s book club. You could even spend the time catching up on, um…sleep.