The other day we flew into San Francisco and made our way to the infamous “Fisherman’s Wharf.” It was there that I saw some very creative entrepreneurs. In most touristy areas you will surely find a handful of street entertainers. In Madison on State Street, along side the shops adoring cheese heads,

you’ll be sure to also find guitarists and singers, spray paint artists, maybe a saxophone player, and even sometimes if you’re lucky a whole folk band. Well, on the Wharf I saw this taken to a whole new level. One man was dressed as a robot, from head to toe in silver. Every time someone would come up to him, usually children, he would move in his robot stiff-body movements, the little fans on his shoulders would rotate and would make a noise. He’d reach into his pocket and pull out a sucker for the child. He stood next to a large boom box that blared rap music. This was fascinating to me.

So, you’re looking to be a street entertainer- you can’t play an instrument, dance, or paint – why not put silver all over your face and body and stand still? I have a feeling this guy was making pretty good money. We could barely get close enough 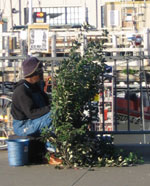 to see him, let alone take a picture.

The next entrepreneur is quite famous. I had heard about him. He sits behind some branches of a bush on the side of a busy sidewalk on the Wharf. When unsuspecting tourists walk by he spreads the branches and startles them. Of course, they laugh, them often give him money. There was a huge crowd assembled all around him watching and laughing with the passing of each unsuspecting person. It was quite funny, being the observer…not the unsuspecting person.

We saw a man performing magic, a dancer, a pan flute musician, and another silver man “statue.” All for the price of admission, free!