Racism, ageism, sexism – these are all wrong and should never be tolerated. On our plane ride home from Tampa the other day I witnessed a new “ism,” which I’ve labeled “kidism.” I define kidism as prejudice or discrimination against people who are acting like a kid. It differs from ageism in that with ageism the discrimination is directly related to the age of the person, with kidism the prejudice is related to one’s actions instead of their age. Victims of kidism can be both children and adults.

The man who was exercising kidism was sitting next to me. He sat reading his paper for a while. After about twenty minutes the child in front of him, who was about four-years-old, started to play. I’m not even sure what he was doing, but in an appropriate volume, he started to talk, giggle, etc. He seemed to be having fun, which quickly shows up on the radar screen of those who are kidist. About a minute after this little boy started having fun, the man leaned forward, tapped the back of the boy’s seat, and asked him to “keep it down up there, please.” The part of this situation that points to kidism, is that the child was not being excessively loud. If the child had been an adult having a conversation with his neighbor he would not have been any louder. So, why did the man have to tell him to “keep it down?”

This is an example of kidism.

There is a fine line between kidism and adults who are annoyed by out-of-control children. Believe me, I’ve been the latter. When parents bring their children into public, it is like putting their parenting skills under a microscope for all to see. Children “test” their parents in public, they try to get away with things and push boundaries. Parents who cannot control their children in public are in a whole different category than what I am referring to.

Adults, like the man on the plane, with severe cases of Adultitis have a hard time being around others who are acting like a kid because it’s like pouring saltwater on a wound. They most likely do not even know they are living with Adultitis and do not realize why they are reacting in this way. They cannot stand being around others who are enjoying the little things, able to be playful, and live with passion. I think it all happens on a subconscious level, but they react in a discriminatory way because of their own distance from this lifestyle. 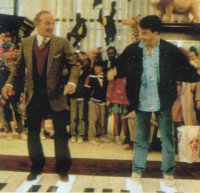 I guess the best way to fight this prejudice is to be a living example of one who can “be a kid,” whether we are four or forty-four. I have been reminded of this point over and over these past forty days as Jason and I took on the daily challenges of the Escape Plan. Who says we have to acquire and maintain stuffy fuddy-duddiness once we are officially members of adulthood. Being adults isn’t the problem, it’s letting go of “being a kid” that gets us into trouble.