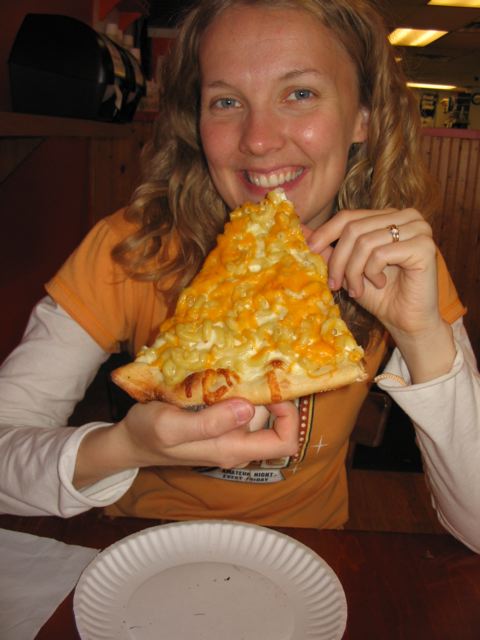 Yesterday Jason and I celebrated our 6th wedding anniversary. Man, the way this marriage is flying, we’ll be up to 60 before we know it.

Jason had the whole day planned by the time I awoke to breakfast in bed. (He makes the best scrambled eggs!) After enjoying the spring weather as we bummed around Madison’s famous Farmer’s Market, Jason excitedly shared with me one his new discoveries in town, Ian’s Pizza.

Talk about childhood! You can read all about Ian’s at Jason’s recent blog post.

I had a hard time choosing what kind of pizza I wanted. I had narrowed it down to lasagna or mac and cheese. The kid inside of me ‘won,’ mac and cheese it was! I was a mac and cheese addict as a child. So, the thought of combining these two foods is unimaginable. This meal would make Atkins enthusiasts cringe. Carbs on carbs, with some grease thrown in, for good measure. YUM! It’s hard to explain how awesome it was.

As we were leaving I saw a young family ordering their slices. They had three little boys. They seems like they had just been told they won a trip to Disney World. They, too, had ordered the mac and cheese pizza. The looks on their faces said it all.

Ian’s was an instant time machine, bringing you back to that childlike excitement that we rarely experience as grown-ups.