Use it or Lose it

Apparently many American’s do not take all of their allotted vacation time. What’s wrong with us? I just read a very interesting article about this on WashingtonPost.com, called “Vacation Deprivation: The Lost Art of Taking Time Off.” The article pointed out,

‘workers are expected to give back 574 million vacation days in 2006, depriving themselves of much-needed breaks, according to Expedia.com’s annual vacation deprivation survey. The number of vacation days employees are skipping this year increased by one over last year. On average, Americans leave at least four days unclaimed annually.

Compared with other developed countries, Americans receive the fewest vacation days per year on average — 14 days, as opposed to 17 in Australia, 19 in Canada, 24 in Great Britain, 27 in Germany and 39 in France, according to the Expedia survey. So not only do we earn less vacation time, but we also take less than we’re provided.’

Our society is one that praises the habits of workaholics, then criticizes them when things start to inevitably fall apart around them. 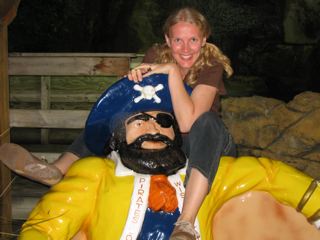 I am guilty of needing a push to take time off. Just this past week Jason and I went to Wisconsin Dells with some friends. The Dells is a hotbed for water parks, amusement parks, mini-golf courses, etc. It was a much-needed break! There are certain things about vacations that just whisk me right back to childhood and de-stress my mind…the constant smell of sunscreen, late night ice cream treats, sore muscles (from too much fun on water rides), the scary thrill of a steep drop on a roller coaster, picking a goofy pose for a photograph with a plastic character. (Oh, the simple joys of tourist attractions!)

One company which was highlighted in the article actually lets its employees decide how many days they would like to take off each year. They work under the premise that people generally know what they need and do not abuse this. They communicate closely with their supervisors to work it out on a case-by-case basis. What a concept! Mutual respect and communication! I bet that company has bunch of applicants for each opening. People need to feel respected and like to be trusted.

This article brings up a simple point that many of us seem to miss. If only we took our maximum vacation days and actually played and rested during those days, instead of squeezing in work, we would be well on our way as we fight against Adultitis. We would be happier, healthier and reenergized for the other fifty weeks of work we’ll do each year anyway.

So, even though I am fighting through my workaholic tendencies to take some days off last week, and again this week, I am reassured that it’s the best thing for me, those around me and our company. Now, pass me the sunscreen- I burn easy!
[tags]Wisconsin Dells, vacation, workaholics[/tags]