This afternoon I had the chance to play a competitive game of balloon volleyball with Jason, my niece and brother-in-law. My poor niece didn’t have a chance with me on her team. It did bring back some great memories of high school sports, though. The excitement of a great play, the sting of defeat, the teamwork… sports are awesome for teaching so many life lessons. I didn’t even realize them all as I played as a kid, but now the metaphors are pretty obvious.

Sometimes I think we deprive today’s children of the lessons that sports can teach them. Whether it’s the ubercompetitive parents and coaches living vicariously through the kids, or the ubersensitive parents and coaches trying to shield the kids from hurt feelings. Joelle Farrell from the Concord Monitor online wrote an article about this problem in today’s youth sports entitled, Peanuts, cracker jacks and stress: For Little League parents and coaches, games can be serious business. 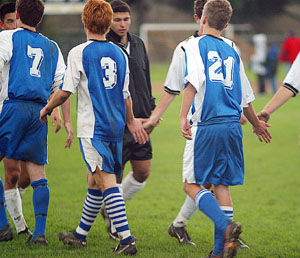 “Janet Sprague, 55, of Concord said that for many Little Leaguers, this is the only time they play competitive baseball, so they should enjoy it.

‘Some of these kids aren’t going to go any further, they just want to be out there and have fun,’ she said as she watched her grandson, Devon Ferland, who played for American Brake Service team yesterday. ‘It’s too competitive among the parents and the coaches, and because of that, I don’t think the children are allowed to have fun.'”

I remember this exact problem when I playing varsity volleyball. There was a freshman who was bumped up to play with the juniors and seniors. She was very good and had great potential to be even better with maturity. The saddest thing about the situation was her father. He was a beast from the stands, yelling at her constantly. As her teammate, it was very distracting and disturbing. Quite frankly, it was also embarrassing. Don’t get me wrong, I took the game seriously and played to win, but there was a line that was being crossed game after game.

Then you have the problem of sports teams who are actually taking the competition out of sports- everyone wins, no ‘losers,’ feelings might get hurt. What!? Dare I say- feelings should get hurt- hear me out. The lessons that accompany defeat are crucial for a child’s development. They teach children how to deal with feelings of disappointment and frustration. They give them the opportunity to practice resilience and persistence, two very important life skills. It is important to learn how to be a ‘gracious loser.’ There was nothing more humbling than saying ‘good game’ to your arch nemesis at the end of a long battle, with you on the losing side… now that’s a life lesson about mutual respect and being a good sport.

We are really setting up our kids for some serious doses of Adultitis, if they do not learn these important lessons in childhood.

It may sting a bit, but who said life’s lessons were meant to be learned easily?