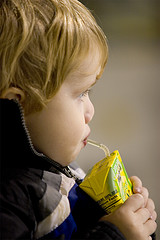 A few years ago when I first started teaching kindergarten I quickly realized that I had a lot to learn about kids and parenting. Five years later I feel like I walked away with a treasure chest of knowledge that I wouldn’t trade for the world, however there are still a number of questions I have.

The first one is this, “Did the person who invented juice boxes ever actually try out his/her invention with a child?” My guess is no. As a grown-up, I, myself, find it challenging to drink one of those things without squeezing it just a tag bit too hard and wearing some of it. How are toddlers and preschoolers supposed to know how to regulate their squeezes? There has to be an easier way!

Well, some practical and light-hearted parents who run a very cool blog called Parent Hacks, have finally figured out the answer and I am excited to share it with everyone I know. The answer is simple…one word- wings.

Someone just introduced me to the concept of ‘wings’ on a juice box. Just fold up the little cardboard tabs on the top, and have the kids hold the juice box by the ‘wings’ — keeps ’em from squeezing the box (and wearing the juice). Simple.

Such a simple answer. Wow.

Here’s another great tip for all of those parents fighting diaper rashes.

My toddler had a diaper rash and would not put a diaper on for anything. We tried putting him in the bathtub, smeared him with every cream known to man, and even tried giving him some Motrin to get him to put a diaper on. He was still insistent that ‘it hurts.’
I stuck his Pampers into the freezer, left them in there for 15 minutes and when I took them out, he let me put them on! ‘Ohhhhhhh cooool’, he said, instead of ‘it hurts.’

These are two awesome examples of the plethora of practical tidbits you’ll find on this blog that will make life easier…and more fun. When life is simpler, it’s always more fun! As far as I know, infants are still not coming with instruction manuals, but this blog might be a great place to start. What a great way to Escape Adulthood! [tags]Parent Hacks, Parenting, Parents, Diaper Rash, Juice Boxes[/tags]