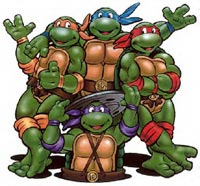 I never realized I was getting, as I always called it, “old,” and that my childhood (and even young adulthood), was gone until a few days ago. I was sitting in the living room at 11 in the morning, still without a shower while my (as he puts it ALMOST) 4-year-old screamed about being a Ninja Turtle who had “team” and my 3-month-old slept comfortably in his swing. I glanced down at the cup of coffee I had been trying to consume to stay awake after pulling another all-nighter with the littlest guy, and saw the words “MOM” written on the cup.

That makes someone at 27 cringe. At that second, I crawled out of the chair and picked up the second little plastic golf club he was using to attack the “bad guys” and decided to join in. I guess it isn’t really a way to escape adulthood (I never really thought of myself in that term), but I guess I looked like a rather large child in a bathrobe at that time swinging at invisible monsters. But the squeals of laughter both boys were emitting by the time I was finished helping in the battle made me realize that sometimes to make it all seem better all we really need to do is play. So I guess my advice to escape the whole grown-up world is to find your plastic golf clubs (or whatever the kids may have laying around), shower or none, and just play.

Then go off and down 4 marshmallows as a way to refuel (which was the advice the oldest gave me), and continue the battle. So needless to say, 4 marshmallows later we were back at it — bathrobe and all.

Club K&J members: share YOUR stories, strategies, victories and challenges in your quest to escape adulthood!