Trash Your TV, Load Up On Legos 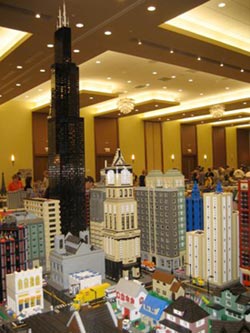 I am officially on the record offering my disapproval of “being 40 years-old with no job and still living with your mom so you can spend more time building your Lego town.” That being said…

I am thoroughly impressed with the photos cartoonist Mark Anderson recently posted from his trip to Brickworld 2007.

I’m not sure how someone would be able to hold down a full time job and create some of this stuff, but then again…

According to Nielsen Media Research, Inc., the average American watches over 4-and-a-half hours of television per day. That’s over 31 hours a week (now there’s your full time job building Lego towns), almost six FULL days a month, and more than two whole months every year. If you live to be 70, you’ll have spent 13 years watching TV.

Meanwhile, U.S. parents spend 38 minutes per week in meaningful conversation with their children. (1)

These numbers are staggering. Let’s wake up people! You complain about America going to hell in a hand basket, and yet you’re spending most of your free time passively watching a box. There are countless things to do besides watching television. TrashYourTV.com lists 10 of them:

I’d like to add one more ot that list: Build something fun out of Legos. I’m pretty sure you could build something cool in 31 hours. Seem like a trivial waste of time? The outrageous promoter P.T. Barnum said, “The noblest art is that of making others happy.” Something tells me that the people who had their Lego creations on display made quite a few Brickworld 2007 attendees pretty happy.

Turn of the TV and be like a kid. Express your creativity. Play a game. Make a friend. Do something to make someone else happy.

And watch your world change.