The secret of success for the most serious (and respected) actors in the ‘biz, is that they don’t take themselves too seriously. Jason and I have been talking about this a lot lately. These remarkable actors get out of their own way by putting their pride on the shelf. They take big risks and let the character come alive, no matter how foolish or strange they may feel. This is the common denominator for the handful of actors I appreciate most.

The poster boys for this are John Travolta, Johnny Depp, Robin Williams, and Tom Hanks. Ever notice how these guys also make the top of the list for “America’s favorite personalities”? We LOVE these guys.

They are serious about not taking themselves too seriously.

Tonight is the opening of “Hairspray,” featuring John Travolta! We fell in love with his voice, moves, and million dollar smile in Grease (1978), and he has managed to keep our attention ever since. Would you have thought back in ’78 that Travolta would be playing a sized 60 woman with big hair twenty-nine years later? Yes, he is playing the role of Edna Turnblad. It is certainly not a surprise to have a man in this role, but Travolta takes a risk and manages to bring out a new side of Edna for the audience. Dana Stevens reviews Travolta’s performance by saying, 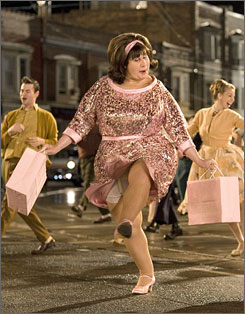 “he chooses to play Edna Turnblad not as a drag grotesque but as a shy, housebound laundress who slowly comes into her own—a choice whose sincerity feels a bit off in this movie’s kitschy context but that’s nonetheless affecting and weirdly brave.”

The magic words are “weirdly brave.”

Those same words can easily be used to describe Johnny Depp’s Captain Jack Sparrow, Robin Williams’ Mrs. Doubtfire, and Tom Hank’s Forrest Gump. They all demonstrate acts of Adultitis-free behavior by mustering the courage to take the risks necessary to transform into these daring and unforgettable characters.

Today on the morning show Travolta shared that when he was in costume as Edna his seven-year-old daughter, Ella, fell in love with her. Edna was a separate person to Ella. He also said that crew members on the set were flirting with Edna. She had a personality and charisma that made her believable, prosthetics and all. Wow.

Johhy Depp has proven this theory again and again. His own daughter thinks he’s a real pirate! His colleagues in the Pirates trilogy admit to being a bit surprised about Johnny’s portrayal of the swashbuckling freebooter. Can any other characters be as risky as Edward Scissorhands and Willy Wonka? As strange as both of those unusual characters are, they are equally fascinating and impressive.

These roles stand out because they are an equal mix of quirkyness and authenticity.

Are you willing to take risks with your life? When’s the last time you needed to dig deep for some courage to be the most authentic you?

Isn’t that what living an Adultitis-free lifestyle is all about?