We had some speaking programs in Utica, NY last week. When asked what Utica is known for we were told that 50 years ago it was quite the hang out for some talented good looking guys, known as the Rat Pack. It’s also a neighboring town to Rachel Ray’s old stomping grounds and has a number of authentic Italian restaurants that serve the local favorite, chicken riggies (which I tried for the first time… Yum!).

We’ve been doing a lot of two night events lately and we’re starting to see a trend. The second night something interesting happens… the people come alive with childlike enthusiasm. After given permission the night before, on the second night we are often met with amazing stories illustrating their “take” on this message of childlike living, with less stress and more fun. It’s a hoot! We plan to get to the event much earlier on night two, because set-up takes much longer with all of the stories… a great problem to have.

Here are a few highlights… 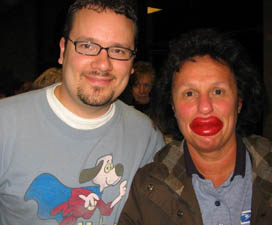 Service, so she is working with the general public everyday. She proudly admitted that she has a lot of fun with people. We believed her, because of that playful spark in her eye, but to further prove her point she casually opened her purse and pulled out some red wax lips and popped ’em in her mouth. She exclaimed, “I always have these around, just to add some little silliness!” If you are over the age of twelve and you carry wax lips on your person, then you, my friend, are having a contagious amount of fun and might just be Adultitis-free. I love it!

On the eve of the first night’s program a volunteer went to Panera Bread to pick up a prearranged donation of baked goods, for the “after party.” When she got there they proudly handed her two huge bags overflowing with french bread… not quite what she had in mind. After the event the first night, as everyone was cleaning up, a group of people were out in the parking lot standing around this woman’s trunk laughing and laughing. They were having so much fun, I had to go over. I quickly saw a trunk full of bread… the multiplication of the loaves, right there 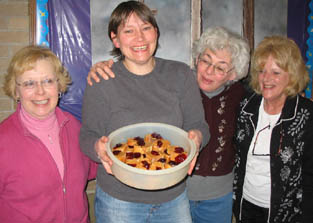 in the back of her Honda Accord. She explained what had happened, assuming that Panera would’ve donated desserts. In the spirit of “making lemonade” out of lemons, one woman suggested they bring peanut butter and jelly the next night and chalk it up to the childhood theme… a fun AND yummy idea.

We almost always share with our audiences the game of hiding pokey. After doing so the first night, a woman came up to us to share this story. In her family they had a little figure of Waldo, from the “Where’s Waldo” books. They would hide it on one another, just like we do with pokey. A few years ago, when her husband was in his last days battling cancer, he secretly decided to hide Waldo on top of the ceiling fan. About a year after he was gone they turned on the fan, and off fell Waldo. They all cried. It was such a unique way to reconnect after his loss and to remember his childlike spirit. The neatest part of her story was the peaceful smile she shared when recalling that day they found Waldo.

It’s easy to become cynical and jaded with “people.” The “people are stupid” mantra is often the easiest one to live by, but when you actually stop and talk to individuals you see that everyone, in their own unique way, is just trying to fight the good fight- just like you.

Take some time to listen. I guarantee you’ll walk away with new tools and inspiration for your own journey.