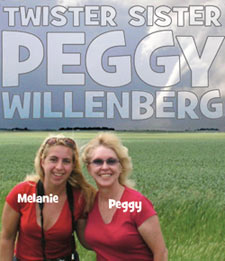 (This is an excerpt of an interview from the Kim & Jason magazine with Peggy Willenberg, who is one half of the duo known as “The Twister Sisters.” Peggy and her friend Melanie Metz started chasing twisters together in 2001. They’ve been involved with two documentaries for The National Geographic Channel, and enjoyed their own series on WE TV.)

Kim & Jason: How did you and Melanie meet and how did you become known as the Twister Sisters?

Peggy: We actually met twice. The first time, Mel attended a Skywarn class I was instructing. It was my first time to present a class and I thought Melanie seemed really smart and knowledgeable. Then about a month later, I joined an Internet discussion group of chasers in our area. She was also in the group and was the only other woman; we naturally began talking on our own. We decided to meet up and go for a chase together. We had a great time and it went from there. The Twister Sister name started out as a joke and it just stuck.

K&J: We’re sure lots of people must think you’re crazy. But then again, anyone who chases his or her dream can be expected to be called crazy at some point or another. Why do you chase tornadoes?

Peggy: I have been fascinated with severe weather and especially tornadoes since I was about three years old. They seemed like such threatening monsters. I wanted to know how they worked and get close to such an awesome thing. Of course there was lots to learn, and life gets in the way, but when the time was right, I turned my full attention to learning meteorology and the art of forecasting. You have to be in the right place waiting for one to form or you will never see one.

K&J: When did your fascination with and passion for tornadoes begin?

Peggy: As a child growing up in Indiana, I experienced a lot of severe weather. I often dreamed about tornadoes (as did Melanie). When everyone else would run to the basement, I would run outside!

K&J: What’s the scariest or most dangerous moment you’ve ever experienced while chasing a tornado?

Peggy: Chasing the Hallam-Wilber, Nebraska tornado at night, we came upon an injured man walking down
a dirt road asking for help. His family was buried in a destroyed house and there was no one around to help other than us. We got everyone out OK, but with leaking propane and lightning all around, it was pretty scary.

K&J: What has been the most thrilling or rewarding moment?

Peggy: Seeing a tornado form 25 yards ahead of us on the road. The vortex went from a tiny thing to a huge tornado throwing trees in about three minutes. I guess you could say we saw the “birth” of a tornado…

Well you’re in luck, because you can read the whole thing starting on page 11 in this FREE digital version of Kim & Jason magazine.