Our featured fan is Jim Peters, who was our June S.W.E.L.L. prize winner. He won a colorful assortment of 16 Kim & Jason greeting cards. Jim shared,

Here are a couple of pictures, the first one is of me and one of my heroes, Donald Duck. The second one is me and another buddy of mine.

• Hometown… I’m originally from Chicago, Illinois… not the suburbs, mind you… actually in the city… 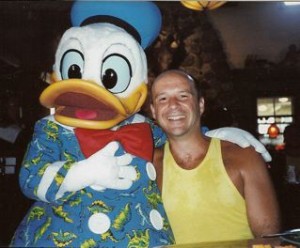 Northwest side… (ok, so I’m a city snob!… everyone always says they’re from Chicago, and then you find out they really didn’t live in the city… I did!) I also lived in St. Louis, MO for many years (once again, in the city… ) before moving to the greater Denver Metro region (yep… suburbia! Notice how I didn’t say I lived in Denver, even though most people wouldn’t have a clue where Highlands Ranch, CO is?)

• My biggest dream… I’ve got two… the real biggie is to go to Egypt and ride a camel down to the pyramids and the Sphinx. That’s probably going to take a while to achieve. So right now my big dream (for the not so distant future) is to attend the Olympics in Vancouver (2010). That would be way too cool!

• My inspiration… St. Francis of Assisi, no doubt about it! He was content with the simplest of things, and realized how amazing everything in nature is. And felt connected to it!

• When I was a kid, I… I loved to collect bugs. (I still love bugs!) They are so amazing… But don’t ever kill them! Collect them, watch them, befriend them, then let them go. 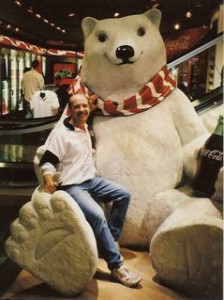 • One way I stay childlike is… By doing something fun everyday. It can be simple, like just telling a joke or funny story (though it usually isn’t something that simple!) I was going to say, “by doing the unexpected,” but people have started to expect the unexpected from me!

• What I know so far… Is that everyday can be an adventure! The world is filled with people to meet, places to see, and things to do!

• My favorite thing about “Kim & Jason” is… The chance to do the things that add real enjoyment to life, and not worry about what someone else is going to say or think! You’re not the boss of me, right?