Tip of the Week: Different World

This week’s Escape Plan challenge (aka our Tip of the Week) is: #1 Different World: Spend at least 15 minutes immersing yourself in a field you know nothing about.

Something I loved about teaching kindergarten was the genuine openness and enthusiasm the kids had for learning something new. I would joke with Jason after school that I was really more like a salesperson than a 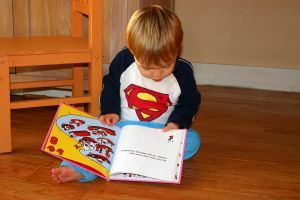 teacher (good practice for our business, I guess). Working with kids is all about “selling it.” Or, as O’Reilly would cringe at “spinning it.” For instance, if I had a math lesson to teach them about greater than and less than (riveting content!), instead of telling them that we were going to have a math lesson, I would ask them if they’d all like to play a game. They would inevitably yell, “YEAH!” Then, I would proceed to turn the math “lesson” into a game… in which monsters were eating garbage… which gave us a chance to talk about the number of things the monsters ate (greater than and less than). It was a fun challenge! Who doesn’t like to talk about garbage eating monsters?

One of the perks about being a grown-up is that you aren’t stuck in a classroom, being forced to learn the objectives that happen to be on the lesson plans for the day. Nope. You are free to learn about what you are interested in. As a kid, you longed for that freedom! The question is… how often do you really take advantage of that freedom? I’m guessing many of you are admitting, “not often.” I know why… busyness. There’s just so much else to do, who has time to stop and learn something new? Between work, family, household chores and paperwork, the last thing you want at the end of the day is to have another thing on your to-do list.

The thing is, re-igniting that childlike curiosity is quite invigorating and contagious. Don’t add it to your long list, replace it with something that’s not as invigorating- like watching the box. This week we’re challenging you to take just 15 minutes to dive into a field you are clueless about. Figure something out. Discover. Be fascinated by something you learn. And most of all, make it fun… just like those eager kindergartners.

If you’re looking for a head-start, check out the site So You Wanna. It’s a great place to exercise your curiosity muscles. Share with us what you learn this week by leaving us a comment on the Escape Plan blog.