A First-Year Father’s 13 Things to Be Thankful For 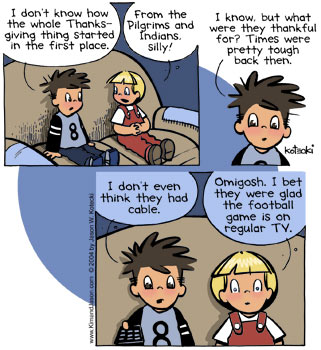 In a few weeks, my daughter Lucy will celebrate her first birthday. Last Thanksgiving, we had to skip the traditional two-hour drive home because my wife looked like she was hiding the Great Pumpkin under her shirt. At the risk of sounding like every other dad who’s ever lived, I can’t believe how fast the time has gone. (Even though the first few weeks did seem like an eternity.)

With another Thanksgiving just around the corner, and my first year of fatherhood coming to a close, I sure do have a lot to be thankful for, including sleep, football, and cheese. Here’s the full list:

1 ) Sleep.
Don’t get me wrong, I’ve always been a big fan of sleep. It’s just that I’m much more grateful for it now. Every hour of sleep is pure gold and Sunday afternoon family naps are better than a juicy steak. Never more true than in the first year of parenthood is the old adage that says, “You don’t know what you’ve got until it’s gone.”

2 ) The guy who invented disposable diapers.
You, my friend, are a saint. Now, my hat is off to all of the brave, patient souls who go the route of cloth diapers. I salute you, particularly because you appear to be some brand of superhuman. Although our choice to go disposable may not be as environmentally friendly, I take solace in the idea that I’m doing my part to jumpstart the economy.

3 ) Football.
Oh, football, you bastion of manliness serving as a needed escape from the jungle of fatherhood. For a few hours, you let me revel in grown men smacking the crap out of each other as I watch from the comfort of my couch in my fleece pants. Who knew that Jay Cutler’s 17 interceptions (so far!) could serve such a noble purpose?

4 ) Moms.
First, let me state the obvious. If guys had to go through the whole childbirth thing, there’d be a lot less people on Earth. Like maybe none. Plus, moms are so good at remembering those little things that we dads often forget, like the fact that it might be a good idea to put a coat on your baby when it’s cold outside.

5 ) Colors not named pink.
I grew up in a home with two brothers. The only females were my mom and our dog. There wasn’t a whole lot of pink going on. But now, in just one year’s time, I have already achieved a lifetime’s worth of exposure to the color pink. Apparently that is the only color you’re allowed to dress little girls in. I have a new found appreciation for the colors blue, orange, green, and yes, even brown…

[Read the rest of this article over at Dad-O-Matic, a cool site for Dads, by Dads.]