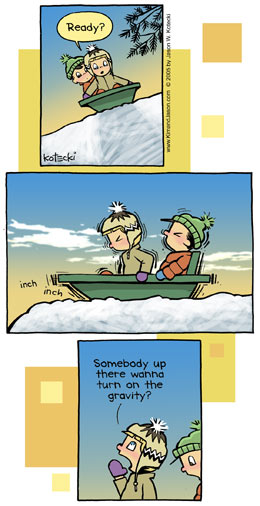 [This post originally appeared on Dad-O-Matic, a cool site for Dads, by Dads.]

We bought our daughter one of those little primary-colored push car toys for her first birthday. It gets great gas mileage and holds up amazingly well in crashes, of which there have been many so far.

The other day, she got herself caught in a traffic jam. The legs of our counter-height kitchen table and its accompanying chairs gridlocked her into a standstill. With all the might a one-year-old can muster, she pushed and prodded that car in an attempt to break free to the open road.

My initial instinct was to jump to her rescue and free her from her dilemma. But I could tell she was close to doing it on her own, so I decided to stay put. Her frustration level mounted, but I kept my distance. It was hard. Finally, with one last exasperated twist, the car untangled from the last chair leg and she was free.

And let me tell you, the beaming glow of pride on her face melted my heart like a Snickers bar in Scottsdale.

This foray into Fatherhood has taught me a lot of new stuff about God. This particular scenario gave me some insight about how he operates.

We all have rough patches in our lives, moments when we get stuck in the weeds. Things aren’t going according to plan and we’re stuck. Adultitis gets the better of us. We work our butts off to make the situation better, but nothing seems to help. After exhausting all of our resources, our frustrations mount. Perhaps we cry out to God to save us. He certainly can, and sometimes he does. A check shows up in the mail. The idea to solve a perplexing problem presents itself, seemingly out of thin air. We find the thing we had given up hope of ever finding.

But sometimes he doesn’t step in to save the day. Sometimes he’s silent.

Even though I often wish he would step in and make things easier for me, I’ve come to see that he has the wisdom to know that sometimes we have to go through difficult situations in life in order to come out stronger, better, and more confident on the other side.

And I believe that nothing makes him smile wider than seeing us accomplish exactly what he knew we could do all along.