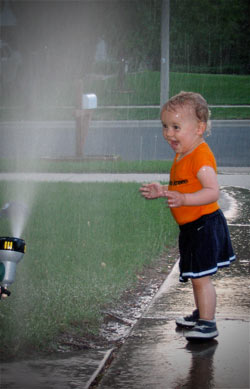 When is the last time you were bored? Truly bored?

In this age of smart phones and instant messages, boredom has found its way onto the endangered species list. Being bored is not a realistic option in our culture. It doesn’t just happen naturally — not like when we were kids. We are constantly thinking and moving and communicating. ALL. OF. THE. TIME. Like it or not.

Well, the other evening Jason, Lucy and I were bored. Yep! We gave ourselves the gift of boredom.

Here’s what went down…

It was a muggy Midwest evening. The three of us were sticky and longing for some fresh air, so we ended up on our driveway just milling about. We found ourselves simultaneously doing nothing. We simply continued doing nothing, and carried on with a whole lot more of nothing when IT happened: we were officially “bored.” The gift of boredom opened the door for a new level of opportunity — one that you only arrive to when you find yourself bored.

Jason grabbed the hose and adjusted the fancy nozzle to the “mist” setting. Fun ensued immediately. Fifteen minutes later, a soggy, giddy, giggling toddler had officially decided that she would like to play in the mist forever – even though her tiny teeth were chattering something fierce and her new sneakers were sopping. It was awesome!

Jason and I had created a memory that we will cherish forever: Lucy vs. the hose.

When you stop everything and just “be” for more than a few minutes, you see things differently. Creative juices flow. You’re willing to try something new, to get a little uncomfortable, silly, or even dirty. Boredom gives you a hunger for fun and this urge becomes instantly contagious to those around you. Think about your fondest memories playing as a kid – weren’t they born out of boredom? Mine definitely were!

Boredom is a gift.

It’s free for the taking but it requires a great deal of self-discipline to turn everything off and stop the noise (something many of us would rather not do). It’s tempting to always be productive, to always be doing… something.

Whatever you do this summer, don’t miss out on the gift of boredom. Your creativity will surprise you. Laughs will be plentiful. Memories will be made.

Isn’t that what life is all about?!