There’s An Adult in My iPad 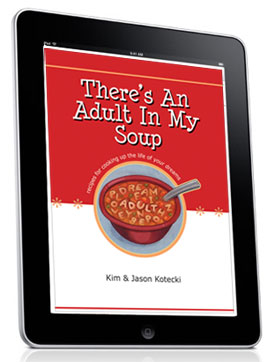 Since a number of you have asked (a number bigger than one), we are thrilled to announce that our latest book, There’s An Adult In My Soup, is now available for the iPad and can be found on Apple’s iBookstore.

(Now we just need an iPad.)

It’s also available on the iPhone and iPod Touch, in case you aren’t one of the cool people who have an iPad (like my Mom!)

I’m really happy with how it turned out. We’ve gotten a lot of great feedback from the paper version, and it made the transition to electronic pretty seamlessly. For $9.99, it’s the perfect sort of traveling companion to tickle your funny bone and make you think while you’re on the subway or waiting at the doctor’s office. The chapters are short and there are pictures!

Naturally, there will be at least one person who will wonder when it will be available on the Kindle. (One thing at a time, people!) All we can say is…we’re working on it. It’s safe to say that the reality of Soup and our other books going treeless is just a matter of time.

P.S. The normal old-fashioned version of the book is still available at the K&J Lemonade Stand and Amazon.com.

Obviously, it’s probably one of the greatest Christmas presents out there on the market today.