On Darth Vader, Adultitis and Our Wedding Day 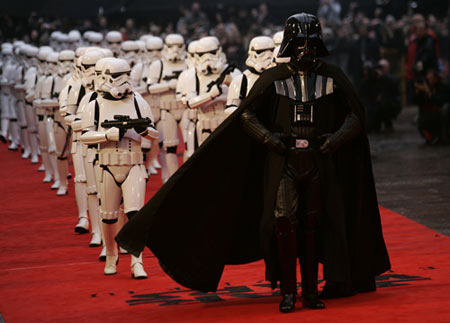 Last Friday, Jason and I celebrated 11 years of being Mr. & Mrs.

In true “Escape Adulthood” fashion, we played hooky in the afternoon and enjoyed a beautiful spring day in Madison together — just the two of us. Lunch outside by the lake, a nice stroll down State Street, dreaming together by the water. Our boss didn’t even care!! :)

It’s fun to think back to our wedding day. There were so many amazing little moments that I like to savor.

I’ll never forget the little surprise we received at about 4:30pm on our wedding day. We had just gotten done with the ceremony and pictures (ouch, my face still hurts thinking about it!) and we were excitedly “hiding” with our wedding party in the back of the reception hall (aka church basement — we kept things simple and inexpensive), waiting to be announced.

You know how DJs do that, where they prearrange with you what song you want to be announced to? Well, Jason and I had set it up so that the wedding party would come in to Darth Vader’s theme song, The Imperial March, and then the two of us would come in to the Star Wars theme song. Anyone who knows anything about Jason should not be surprised. HA!

As it all unfolded, the DJ accidentally switched the order of the two songs and Jason and I ended up walking in to Darth Vader’s song.

Maybe only true Star Wars fans will appreciate this story, but the difference between the songs is significant. Darth’s song is much more sinister — it’s a villain’s theme song after all — as opposed to the Star Wars theme song which is much more hopeful and triumphant. When we got to the head table, I looked over at Jason to see if he was disappointed by the mistake. First of all, he had grin that resembled his kindergarten class picture, so I knew it was okay. He thought that the “happy accident” was even cooler the way it all turned out.

The reason I am thinking about that little mix-up 11 years later is because it’s a good illustration of how sometimes in life things turn out the way they are meant to be, even if they don’t go the way you planned it all out ahead of time.

The Imperial March has a certain tone about it that implies that there’s a fight, a battle about to ensue. As we marched through all of our friends and family and that menacing song filled the room… it ended up being symbolic in a lot of ways. Our wedding day was, indeed, the start of a HUGE battle — our crusade against Adultitis. Even though the word Adultitis had not yet surfaced to the top, we were beginning our alliance to fight the good fight together as a team… and it’s almost as if that moment was our announcement to everyone who meant something to us that we were going to do big things together.

Melodramatic? Yeah, maybe. But I think there’s something to it. Recently a good friend of ours asked Jason and I this very important question…. “In life (and in business, in our case) what’s your greatest advantage?” He knew the answer and the lightbulb sure clicked as he said it: “EACH OTHER.”

I am humbled and blessed as I look at all that Jason and I have accomplished together these last 11 years. With the unending support of our dearest family, friends, and online encouragers — we have been able to continue this fight and build momentum that continues to prove to me that this mission is MUCH bigger than either of us.

If you have a partner in crime, whether it’s a spouse, dear friend, co-worker or family member, are you taking full advantage of the power of your partnership?

Magnificent endeavors evolve when two heads are put together.

If you’re flying solo at the moment, be open to the partnerships that present themselves and be willing to be a bit adventurous along the way, to take a risk. Your villain will present itself eventually, and when it does, you will be ready to march confidently towards your crusade hand in hand — just like Jason and I did eleven years ago.