Your Golden Ticket is Waiting 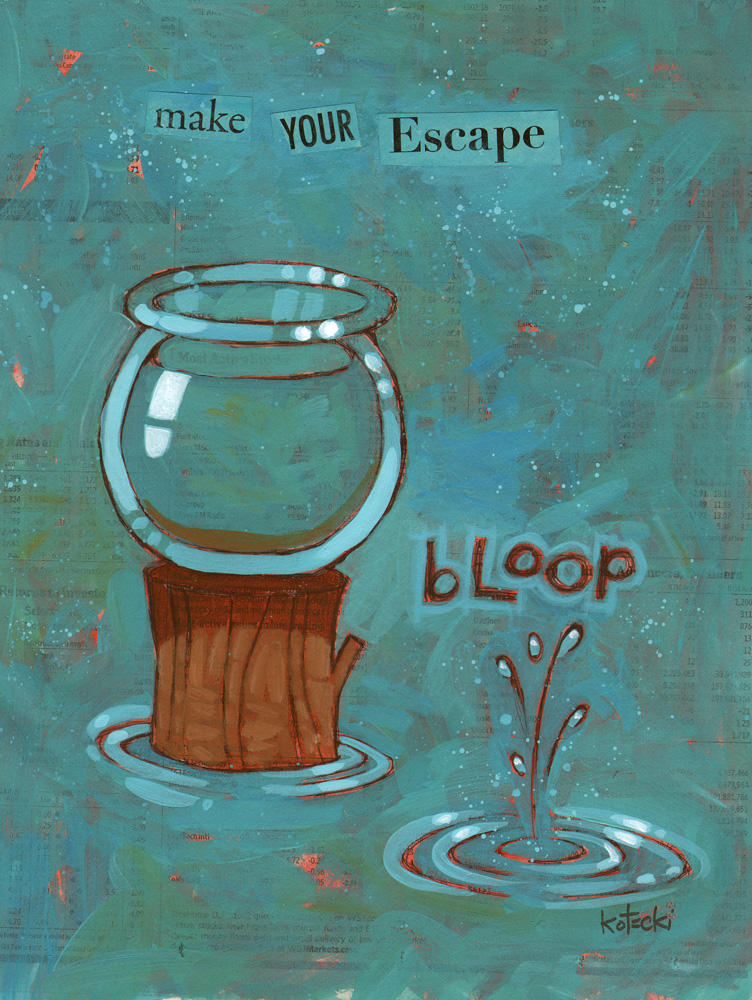 I created this painting last year for the inaugural Escape Adulthood Summit. We used the metaphor of a fish escaping from a fishbowl as a theme. Every group’s table featured a real live goldfish as a centerpiece. And each team used things like noodles and egg cartons and glue to create a “vehicle” their fish could use to escape. The t-shirts everyone received were emblazoned with a depiction of the Bloop! graphic above. And after two days of laughing, thinking, playing, sharing, and eating yummy things, I presented each of the attendees with a print of this image.

It’s something I think we can all relate to. It certainly applied to our decision to even host the Summit in the first place. For too long, Kim and I assumed an event like that would happen years from now. When our kids were older. When we had a bigger tribe. When we had more money we could afford to lose. In order for the Escape Adulthood Summit to become a reality, we had to escape the confines of our preconceived notions and self-limiting beliefs.

I’m glad we did, because the event itself was nothing short of magic. It was one of the coolest things I’ve ever been a part of in my whole life. The feedback we got from the people who came only affirmed our decision to “escape.”

Are there self-limiting beliefs, dead-end situations, or old ways of doing things in your life you need to escape from? Does having a small army of people that get you and support you in making your escape seem appealing? Are you long overdue for a break from the hustle and grind of the everyday — a break just for YOU? If so, perhaps you’ll want to consider joining us for Escape Adulthood Summit #2.

Yes, we’re doing it again. This time we have to escape the fear that we can’t possibly top last year’s experience. We’re willing to dive in, knowing that no matter what happens, we will be rewarded with a great adventure.

Won’t you join us? Golden Tickets are on sale now, but there are only 40 available.

Whether you are able to attend the Summit or not, the first step toward an escape from whatever is holding you back is literally that: a step. Just one. It may require a giant amount of courage, but the step can be very tiny.