Grown Men Go To Great Lengths to Avoid Being “It” 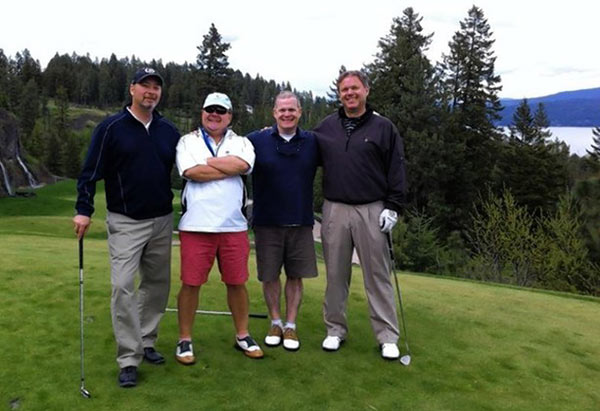 Benjamin Franklin said that. Or maybe it was George Bernard Shaw or somebody else entirely; it seems the Internet can’t make up it’s mind. The sentiment is true, though. And as I like to remind people, grown-ups have the money, the skills, and the autonomy to take play to a level of awesome kids could only dream of.

Exhibit A: Nine guys, friends since high school, who have been engaged in an epic game of “Tag” for over 20 years.

It started as a way to have fun while they were in high school and it grew to be quite competitive. On the last day of school, Joe Tombari was stuck as the last player tagged as “It” and figured he was destined to spend the rest of his life with the label.

That is, until a reunion several years later rekindled talk of resurrecting the game. Even though the guys had grown-up, began careers, started families, and spread out across the country (one even became a priest), they concocted a brilliant way to keep the thrill alive. A Wall Street Journal article by Brian Dennehy describes the adaptation:

The game they play is fundamentally the same as the schoolyard version: One player is “It” until he tags someone else. But men in their 40s can’t easily chase each other around the playground, at least not without making people nervous, so this tag has a twist. There are no geographic restrictions and the game is live for the entire month of February. The last guy tagged stays “It” for the year.

That means players get tagged at work and in bed. They form alliances and fly around the country. Wives are enlisted as spies and assistants are ordered to bar players from the office.

The group even has an official “Tag Participation Agreement,” drafted by the lawyer in the group and signed by all. Of course, it includes a no “tag-back” clause, which prevents you from tagging the player who just tagged you.

The article goes on to explain some of the hijinks, including the time one guy was invited to check out a friend’s new Honda Accord. What he didn’t know was that his buddy Sean — the current “It” man — flew in from Seattle and was hiding out in the trunk of car and jumped out to tag him.

I love it. But what matters most is that Adultitis doesn’t.

Why not start a similar game of tag with some people in your life? High school friends, college roommates, family cousins, whoever. Is it silly? Sure. But it’s also an exhilarating way to fight Adultitis, and a terrific way to preserve friendships and stay connected.