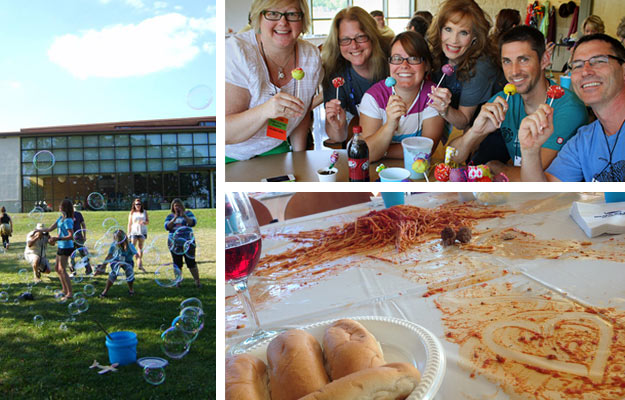 “Because this is better.”

That’s the answer Chris Guillebeau gave at the annual World Domination Summit when he was asked why it was worth pouring all the effort and money and man hours into putting on the annual event in Portland when he could easily reach more people through his blog and bestselling books.

This past weekend, I knew exactly what he meant.

The second annual Escape Adulthood Summit was even more amazing than I expected, and I had pretty high expectations. (Details and photos are coming soon.)

For the second straight year, we made next to nothing on the Summit. The balance ledger might show a profit of a few hundred dollars, but if you were to factor in all the hours involved, we definitely took a loss. But it doesn’t matter to us. It’s still worth it and we’re already planning the next one.

Kim and I had toyed around with the idea of making the event a bona fide non-profit initiative (rather than an unintentional one :) Naturally, we were hesitant. It’s a nice sentiment, but what if it really grows? That could prove to be a pretty stupid decision. Well, after standing in the midst of 40 people who’d just got done sharing how the weekend had impacted them, it suddenly became a no-brainer.

From this moment on, The Escape Adulthood Summit will be a non-profit initiative. Officially.

It’s a decision that just feels right. It’s become clear that this is a gathering that needs to stay intimate. There is still room to grow, sure, but turning it into a 500 or 1,000 or 3,000 attendee conference would rob it of what makes it so special: the community, the connections, and the opportunities for vulnerability. This decision allows Kim and I to let go of the pressure to scale it for the sake of revenue. Any profits we can make can be invested right back into making the experience better, rather than cutting corners to make sure we have a healthy bottom line.

It is true that I can reach a lot more people way more efficiently through our website and social media. But impact can be measured in depth as well as breadth. You just can’t beat the level of impact you can make when you can look into a person’s eyes, listen to their dreams, hear their laughter, and share in their tears.

Standing in a sun-soaked room on a beautiful afternoon surrounded by some truly amazing individuals made things crystal clear. This IS better. By far.

I can’t wait to share what we have cooking for the next Escape Adulthood Summit. I hope you’ll join us.