Behind The Scenes: Our Speaking Trailer Video 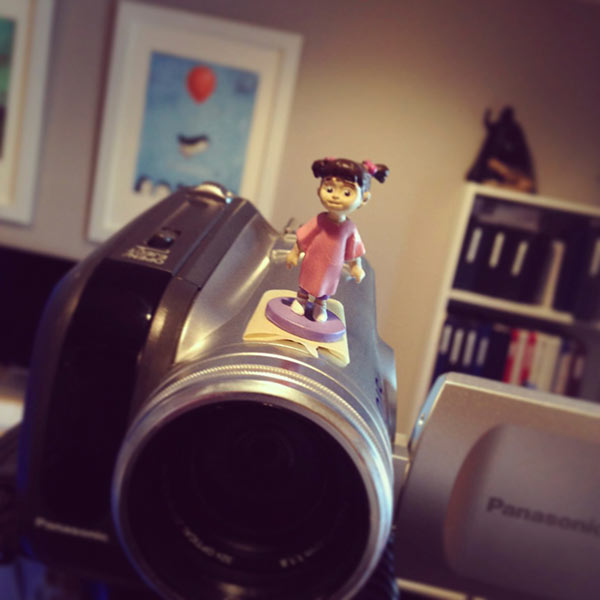 It had been on my list for an agonizingly long time: Create a new speaking video.

The old one served us well, but was getting long in the tooth. (Most of the footage was from over five years ago.) It was a task I dreaded.

I knew what I didn’t want: A demo reel with cheesy spinning graphics and an announcer extolling the virtues of a speaker who sounds like he got lost in 1990. We have enough cheese here in Wisconsin, thank you very much.

What did I want? Something fresh, fun, and simple. Something that looked professional but had the charm of something homemade, like the best kinds of pie.

After much wailing and gnashing of teeth, the video is done. It turned out to be eight minutes long. It’s amazing how much time and effort it takes to make something so short in length! There are many things to consider. I had to find the right music, something original and cheery and upbeat, but not too juvenile, and not too much like a bad local TV commercial. I’d need to sit through hours of speaking footage, cherry picking stuff that expressed a decent thought in a short amount of time. The hardest part was deciding on a narrative, the skeleton that would hold everything together in a way that made sense.

Like I said, it was job I did not look forward to. And considering the fact that speaking is the bulk of our livelihood, there was a certain amount of pressure to make sure it turned out well.

I specifically avoided watching other speakers’ videos because I didn’t want to be influenced. I wanted to come up with something original. I was also afraid I’d see something that was so good I’d immediately spin into a shame spiral knowing I’d never be able to produce anything remotely close. I cannot tell you if my aim to create something truly original was accomplished, because alas, I never did watch any other demo videos.

The biggest hurdle was the narrative. What was the structure? What road would it lead the viewer?

I spent way too much time thinking of this, to no avail. Eventually, I had the novel idea of actually reading the sales copy on our site. After joyfully discovering that it actually sounded quite good and did the job of describing what makes me unique reasonably well, I decided it might be smart to avoid reinventing the wheel. So I pulled the best bits of copy into a script that would serve as the narration of the video.

Then I set up my video camera on a tripod in my studio, next to the window to provide natural light, and spent a few hours talking to it. I rotated the view screen so I could see how the shot would look, but had to keep reminding myself to look at the camera instead of the screen. I ultimately taped a small figurine of Boo from Monsters, Inc. to serve as my audience of one.

I quickly discovered that speaking for video is very similar to speaking to a large audience. If you speak how you normally speak, you end up looking like a barely animated cadaver who was just resurrected to give a boring speech. If, however, you make an effort to be a little bit bigger than normal — almost on the edge of ridiculously unnatural — it comes across just right to the audience. I do not know why this is, it just is.

So I shot lots of takes of me saying lines over and over, hoping that just one would be useful in the end. I’m not sure how it’s possible to feel self-conscious about what you’re doing when there is no one around to hear or see you, but I did. I guess Boo is an intimidating audience.

I had to try importing the footage into iMovie three times because some of the clips ended up with the sound and image not synchronizing. (Not sure if it was the video camera or the computer who was being the jerk; perhaps they were both in cahoots?) Once I picked the best lines and placed them into the timeline, the live speaking footage and testimonial clips just fell into place. My intuition kicked into high gear, and it felt like I was just putting them where they told me they should go.

My final and favorite step was adding in the music. It has a way of tying everything together and taking things to a new level. Other than the ominous track I used for the bit about Adultitis, I used three different songs, each with similar instruments and tempo. This helped give a feeling of cohesiveness while preventing the whole thing from sounding too monotonous.

Here’s how it turned out:

In the end, I’m really happy with the result. I kind of wish I had a hi-def camera for the narration parts, but since the video will be mostly seen on computer monitors in a browser, it’s not the worst thing in the world.

Hopefully, it will serve us well for another half decade…

What do you think? What’s your favorite part? Any questions about something I didn’t cover? Fire away in the comments!