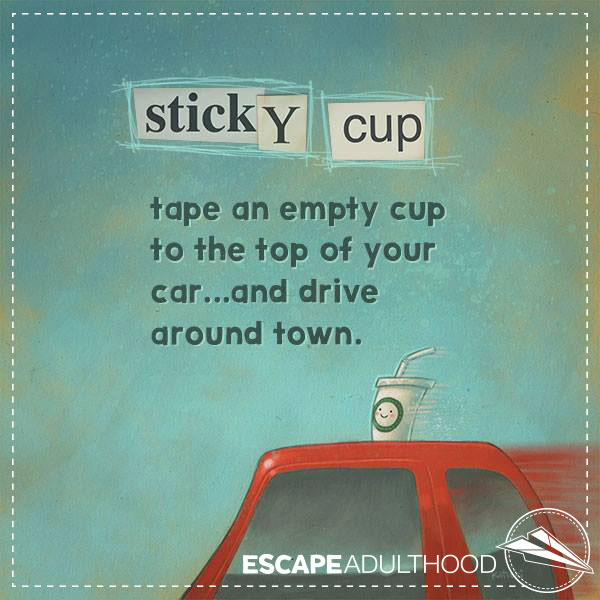 We recently hosted a live hangout on Facebook to celebrate the end of winter. It was a fun and frantic online hangout filled with laughter and lively discussion. We invited the partygoers to share their favorite April Fools Day prank. Here are some of the best:

My husband moved all of the clocks ahead 5 hours when I fell asleep on the couch. Woke up thinking that to had to get up for work in 45 minutes when it was really only 2:30 in the morning! (Lisa Toli)

At work, put the phone in the ceiling tiles. Or tape down the phone receiver. (via LA Denniston Klitzke)

My daughter put a rubber band around the kitchen sink sprayer. (via Karen Spicher Zakin)

Flour was put on the ceiling fan in the winter time…first spring day it was warm, the fan was turned on… (via Sue Gudenkauf)

Moved my coworker’s cup from where she put it on the drinking fountain to a shelf on the opposite back wall. Took her an hour to find it. (via Anna Baker)

Put colored milk into a pitcher in the fridge. My niece and nephew were surprised to be putting blue milk on their cereal. (via Kristin Hoehne)

I made a poop-shaped brownie and left it on the floor in front of the toilet for my husband to find! (via Amy Metcalf)

My mom likes to put a raisin in the toothpaste “neck”, so the person tries really hard to squeeze the tube and out pops a raisin! (via Wendy Whitney Scherer)

What’s your favorite April Fools prank? Share it in the comments below!

And to make sure you’re the first to know about our NEXT Escape Adulthood LIVE party, become an Insider!