What Floats Your Boat? 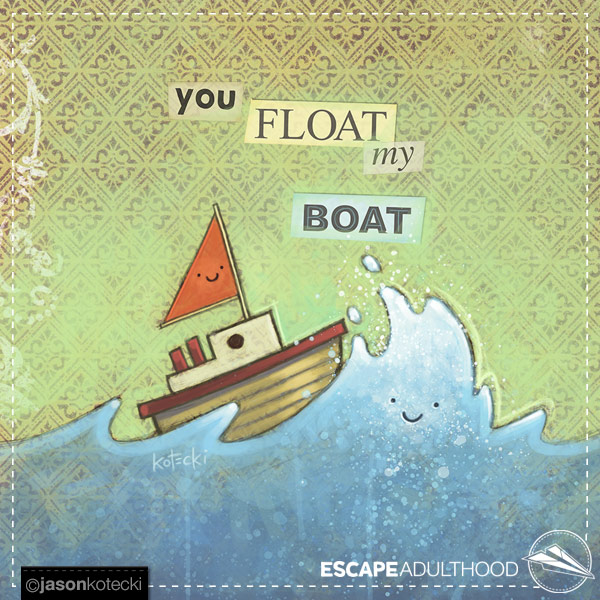 Sometimes I see people who I can tell have Adultitis. They are not rude or angry, as you might think. The ones who have it the worst are a little bit dead inside. I’m not talking about clinical depression or the grief that comes from losing a loved one. It’s the sadness that comes from having gone such a long time without doing the things that bring them joy.

Apple co-founder Steve Jobs said that he would look himself in the mirror every single day and ask himself one question: “If this were the last day of my life, would I want to do what I’m about to do today?” He said that if he answered no to that question for too many days in a row, then it was time to make a change.

The people with the worst form of Adultitis have said no to that question for too many days in a row.

Successful entrepreneur and popular TED speaker Derek Sivers suggests that we say no to everything that isn’t a HELL YES.

I like that premise, even if it’s not always entirely possible. For instance, paying taxes is not my favorite monthly activity. Also, I am not a fan of changing diapers. Alas, I regularly have to hold my nose and do both.

That being said, I do believe that the level of success and happiness you experience in life is directly related to how much time you spend on things that light you up.

What’s one thing that just the mere thought of doing fills you with giddy, anticipatory joy?

When was the last time you did that?

If you bury the things that light you up, things can get dark fast.

I’m not saying you have to spend every waking moment doing it.

I’m not saying you have to turn it into a career.

I’m merely suggesting that you might want to spend a little more time doing the things that float your boat.