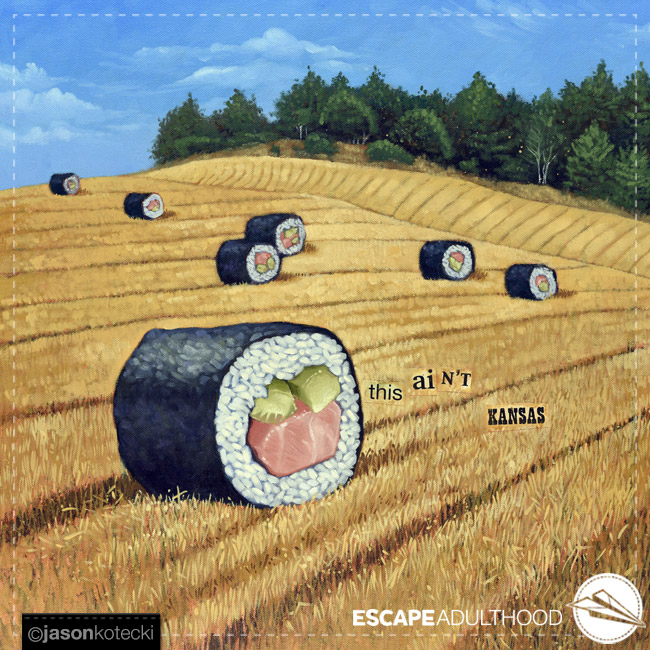 As dissimilar as they may appear on the surface, rural Midwestern farmers and rural Asian farmers have some things in common. One is a deep respect for tradition. This is an important value that can provide a sense of stability and help pass on hard-earned wisdom to future generations.

But I believe we must also have an openness to new things. Not so that we will abandon our ideals, but so that we can experience a much richer life.

It’s like the difference between experiencing life in black and white versus full color, like in the 1939 version of The Wizard of Oz.

Indeed, doing things the way you’ve always done them, and surrounding yourself with the same people, places, and opinions, is a pretty good way to live life in grayscale.

I made this piece as a reminder that sometimes we need to break free from what’s expected. Mashups of east and west, urban and rural, liberal and conservative, old and new, are what makes life more interesting.

How does one opt for a more technicolor life? Simple: Take a break from your traditions.

Read a magazine or watch a documentary on something you know nothing about. Order food you’ve never tasted before. Take a new form of transportation to work for a week. Have a conversation with someone who holds an opposite point of view (without trying to convince them they’re wrong).

This openness to new ideas, perspectives, and ways of doing things is a key to unlocking opportunities that can change your life.

I have struggled the past few years trying to find my place. I have been a member of the National Speakers Association for over a decade now and it has served me well. I have made wonderful friends and have learned a lot about growing a successful speaking business.

But in recent years, I’ve had a hard time finding relevant examples to model my business after. You see, I have this art thing that I do, which is very unique among the speakers I’ve encountered. Even the ones that that incorporate art somehow into their offerings do so in a way that’s totally different than the direction I want to head.

And so I have spent the better part of the last two years seeking out art-centered business models. I have tried to learn as much as I can from other successful artists. And I’ve learned a lot, but it turns out, most of them aren’t so keen on the whole “speaking in front of large crowds” thing.

Until I finally figured out there is magic in the mashup.

It’s the combination of two seemingly unrelated things –– public speaking and making art –– that give me my edge and help make me stand out. Borrowing the best of what I’ve learned from great speakers as well as successful artists, while mixing in my own unique quirks and talents, has been a game changer for me.

If you’ve been feeling paralyzed by the belief that things have to go a certain way, or if you’ve felt like a square peg trying to force yourself into a round hole, or if life just feels a little too gray…it might be time to mix in some new ideas, experiences, and assumptions.

And watch your world change.