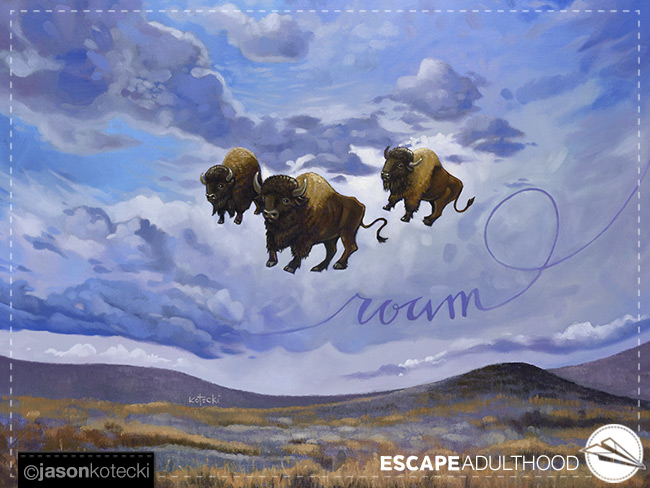 Starting at younger and younger ages, kids are expected to begin thinking about what they want to do with their lives. I feel bad for them, because between increasing homework loads and more demanding extra-curricular commitments, they are given less and less free to time to figure out who they are, and what lights them up.

No matter how old you are, a little space to roam can make a big difference.

After three grueling years producing his show Sam and Friends, Jim Henson was burned out and ready to give up on puppetry. Then he left for a yearlong walkabout in Europe. He took in puppet performances throughout the continent, impressed by how appreciated the art form was outside the United States. “Until then, I hadn’t taken puppetry all that seriously,” Henson said. “It just didn’t seem to be the sort of thing a grown man works at for a living.” But Henson returned from Europe energized and inspired, and would eventually create The Muppet Show and Sesame Street.

I like the idea of a gap year, which is typically a period of time taken between high school and college in order to deepen practical, professional, and personal awareness. I’ve also heard of people taking them mid-career, or married couples who take them when they become empty nesters, in order to re-establish their relationship as it enters a new phase.

Every once in a while, we all need a bit of time and space to wander, wonder, and think about what’s next.

I love this definition of roam: To go to different places without having a particular purpose or plan.

Here’s another good one: To move about or travel aimlessly or unsystematically, especially over a wide area.

The next step in our life journey is not always evident. Perhaps you are in a season that calls for some aimless travel, even if it’s just spending few days outside of your normal routine.

Sometimes we need to break free from the day-to-day.

Sometimes we have to roam a bit to find ourselves.