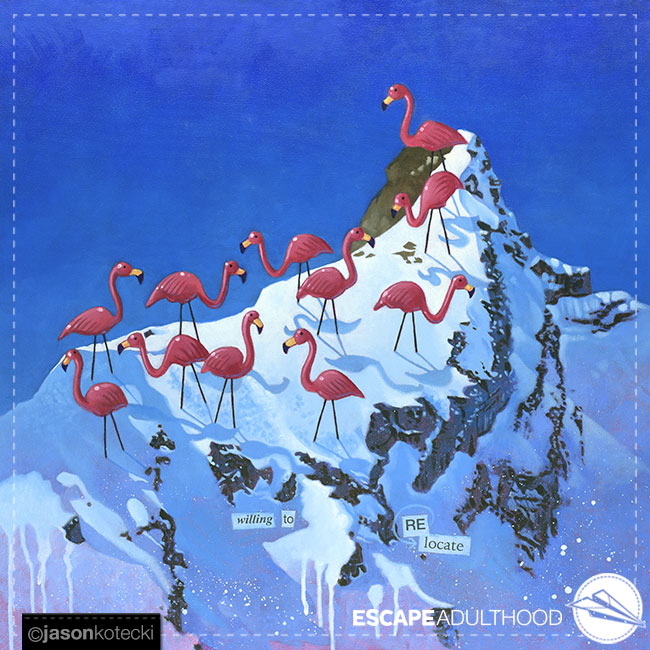 When Kim and I decided to move to Madison after we got married, neither of us had jobs, or job prospects for that matter. I’m sure some people thought we were crazy.

Kim and I didn’t have to leave home. It was fine and it offered opportunity. But we wanted an adventure to call our own, and suspected that the life we wanted to live would require a change of scenery.

And so we were willing to relocate.

We had to leave behind that which was familiar in order to grow into who we were meant to become. We picked Madison, but in our case, the need to move away from our comfort zone was more important than the actual location itself.

Sometimes we have to be willing to relocate in order to make our dreams come true. Of course, that might mean moving across town, or across the country.

But it might mean moving into a different group of friends.

It might mean moving from where our customers are today to where they will be tomorrow.

It might mean moving into a new way of seeing ourselves, perhaps from the role of victim to that of victor.

When I was a brand new speaker, Kim and I helped form a mastermind group with a few of our peers; talented people in a similar stage as us. We had the harebrained idea to invite Robert into our group. Robert was a true pro that we all looked up to. He’d been speaking for years and had a thriving business. We never thought he’d actually say yes.

The thing that impressed me most about Robert was his openness to new ideas. He shared hard-earned lessons, but never paraded the fact that he was further along than any of us. He looked at us as true peers. He was always curious and open to our ideas. He regularly asked us for our opinions and was eager to try out our suggestions.

I remember thinking that when I grew up and got really successful, I wanted to be like Robert.

Here’s the thing. I now see that he wasn’t patronizing us; he was smart. He knew that in order to grow his business and get better as a speaker, he couldn’t stay where he was. He had to be willing to relocate.

Sadly, the reason he stood out is because his attitude is rare. I’ve seen many speakers – and businesses for that matter – slowly fade into oblivion and irrelevance because pride held them back. They already knew it all. They weren’t open to a new path.

Robert was successful. But he wasn’t about to settle.

If you are not satisfied with your life as it is now, you have to be willing to relocate from where you are now to where you want to be.

If you want to experience the summit, you have to say goodbye to sea level.