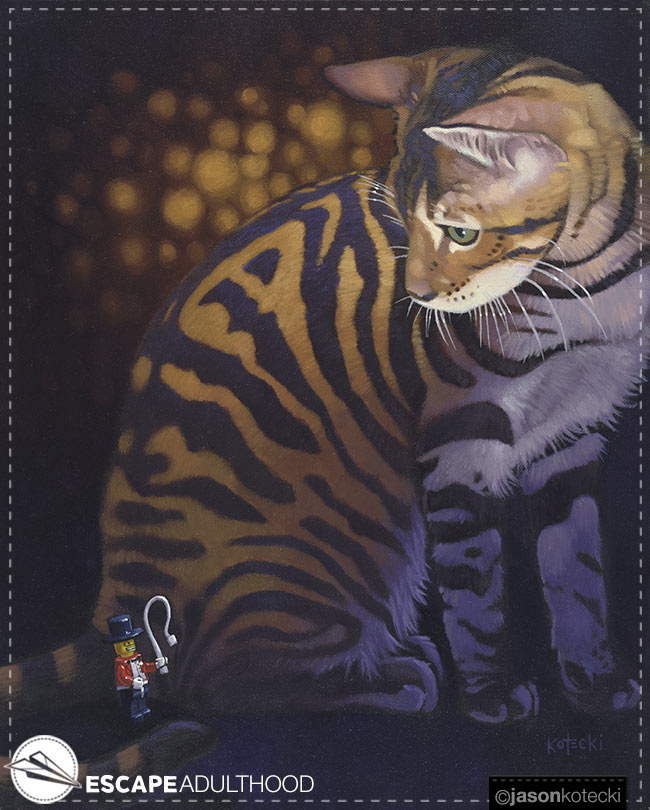 The absence of fear is not bravery.

The absence of fear is a terrible life.

If you stay exactly where you are, and never try anything new, you may be able to avoid fear. Maybe.

If you want your life to matter, however, fear comes with the territory. You’re going to have to figure out how to tame it.

The good news is that our fear is never as ferocious as we make it out to be.

Most adults don’t consider themselves to have a robust imagination; that’s the realm of children and fairy tales. However, there is one aspect where most adults actually have an over-active imagination, and that’s when it comes to our fears. It doesn’t require any effort at all to picture our portfolio going belly up, our project crashing and burning, or ending up penniless, homeless, and living in a van down by the river while eating Spam out of a can. We can picture all of these things easily, in vibrant, living color just as easily as a child imagining a personal tour through Willy Wonka’s chocolate factory.

We easily dismiss any vision of an ideal (but as of yet unrealized) future, but give total credence to even the most far-fetched worst case scenario.

A better strategy is to stop pretending that our imagination has gone missing, realize how powerful it is, and start using it to help us. Whenever I am freaked out about something, I like to do a little activity that only requires three steps, but requires full use of my imagination.

The first step is to imagine the worst-case scenario in your situation. This is the easy part, because we probably already have a head start. It’s helpful to write it down or say it out loud, because the mere act of shining some light on it helps us to see how ridiculous it is.

The second step is to imagine the best-case scenario. This might be a little harder, but it’s a lot of fun. Enter Mr. Roger’s Land of Make Believe and visualize the most preposterously positive scenario that you can possibly imagine. The sort of thing that would make you say, “If you wrote this into a movie, no one would believe it.” You will notice that you begin to turn the tables on fear and plant a vision in your head that can have a eerie way of coming to pass.

The final step is to imagine a likely scenario. This will likely land somewhere in the middle of the first two. Your job is to pretend that you are a Las Vegas oddsmaker, and draw up a picture of how things will most likely go down. It’s not ideal, and might be uncomfortable, but it’s surely nowhere near as bad as the worst-case scenario. Meanwhile, ideas will start to surface about some practical things you can do to help your cause.

This activity helps you use your imagination for good, and also reminds you how it can trick you into seeing your situation as more terrifying than it really is.

When I was a teenager, I worked at a car dealership. I was a good worker, but I had never received a raise. And I was trying to save up for car. I decided to ask my boss for a raise. He was the owner, a smart, no-nonsense, sometimes gruff kind of guy. I put it off for weeks. I carefully planned the argument that made my case. I rehearsed my speech, prepared to list my accomplishments and call in lead witnesses if needed. I debated the proper time of day to ask: first thing in the morning? At the end of the workday? On a Saturday when the service departent was closed? It went without saying that the beginning of the conversation was crucial. I needed to float a trial balloon to gauge his mood. Any sense of irritability and the mission would have to be aborted at once. More than once, I considered what to do if he fired me on the spot for being an ingrateful little peon.

Eventually, I decided that the day had come. I screwed up my courage and walked up to his office, prepared to handle any possible rebuttal and ready to deliver an impassioned speech about justice and landing on the right side of history.

“Excuse me, Ron…can I talk to you for a second?”

That must have been when I blacked out. I probably mumbled the word “raise” at some point, but there was nothing close to the memorized inspirational speech I had practiced.

He let me flounder for a about seventeen seconds before putting me out of my misery and saying, “Yeah that sounds fine.”

I walked back to my wash station on cloud nine. I had no idea that conquering the world would be so easy.

Sometimes the tiger we’re fighting is nothing more than a house cat.